As VB’s store finally opens its Dover Street doors to the public, Lorna Davies meets the lady herself to talk shop, and find out why Mayfair is the perfect base

I see Victoria Beckham’s reflection before I meet the woman herself. She’s making her way up the huge concrete steps of her first-ever standalone store when I spot her in the vast mirrored ceiling that covers the ground floor – white motif tee, grey skinny jeans, a black jacket perched on her shoulders, all VB. She’s as immaculate as expected, and petite, made a good few inches taller by her huge Azzedine Alaia high heeled boots. “Thank you so much forcoming, not everything is finished, we’re nine days away,” she says, shaking myhand and fixing me with her brown, shadow-lined eyes. She’s calm and friendly, excited but in control. “I feel like I’m welcoming people into my home!”

The hoardings are still covering the Dover Street entrance, which has a giant automatic sliding door aside a product-less window. “We’re not going to have a traditional shop window,” Victoria explains.

It’s not only the window that isn’t conventional. The entire shop itself is an architectural triumph. It’s almost cavernous, made more so my the endless mirrors. Victoria worked “very closely” with Pimlico-based architect Farshid Moussavi, former Foreign Office Architects founder – “she’s got a really great eye.”

The store has all the Victoria Beckham brands plus accessories, optical and denim, and will probably house Victoria’s new shoe range debuted at New York Fashion Week last month (all flats, surprisingly), as well as a range of exclusives. Victoria also hints at some artist collaborations in the basement – she rates Jeff Koons and “so many contemporary artists.”

Every last detail is covered, from the till-less cash desk (it’s all on iPads), big changing rooms (Victoria wanted room for kids, husbands and shopping) to the signature blonde gold chains and zig-zag railings from which the tailored clothes hang.

“Someone yesterday said the minute they walked in the store, they knew it was a Victoria Beckham store, which I thought was great because I like to go shopping but I wouldn’t say that anybody else has inspired me with regards to how I’ve done this space,” Victoria asserts.

Her online business is a success, reportedly turning over £13 million last year, so why a store now? “I suppose Idid it a little bit back to front, I did online first because I really wanted to know who my customer was. But I still personally like to go shopping. I think it’s great for a customer to be able to step foot into my vision, my world. This is fashion and we take it very seriously but it should be fun as well and I want people to enjoy coming to this store.”

If this is Victoria Beckham’s world,then her world is slick, urban and glamourous.

Bottle green glass and American walnut is used throughout, it’s gallery-like, the clothes the stars of the show.

Victoria will be in the store herself “a lot, really getting to know my customers.”

Born in Harlow in Hertfordshire, trips to the capital were a regular occurrence for Victoria growing up. After livin gin Los Angeles since 2006, the Beckham clan – David, Victoria, Brooklyn, Cruz, Romeo and Harper – are now settled Kensington, so it was “really important” forthe first store to be in London.

“I love travelling, I really do, but I’m very proud to be from London. I find London is the most beautiful and inspiring city in the world, so for me there was no doubt about where the first store would be,” she smiles.

She says Mayfair is “beautiful” and she fell in love with the space, previously occupied by sporting store Orvis, immediately.

“I believe in fate, and I found this place and it just felt right.”

“Yesterday I was standing at the window and looking out and I thought: ‘Wow, a store on Dover Street.’ If someone had said to me five years ago that I would be in this position I wouldn’t have believed them,” she says.

After dipping her toe in the design world in 2004 with a line of jeans, Victoria launched her own range of dresses to rave reviews at New York Fashion Week in 2008, she’s steadily expanded since then, boasting a celebrity clientele including Eva Longoria, Blake Lively, Julia Roberts and Cameron Diaz.

As we say our goodbyes I congratulate Victoria. The stunning shop is a testament to how far the SpiceGirl-turned-WAG-turned-designer has come. “Thank you. I’m really proud of it. This feels like me. This is the blueprint. Who knows where we’ll go from here?” 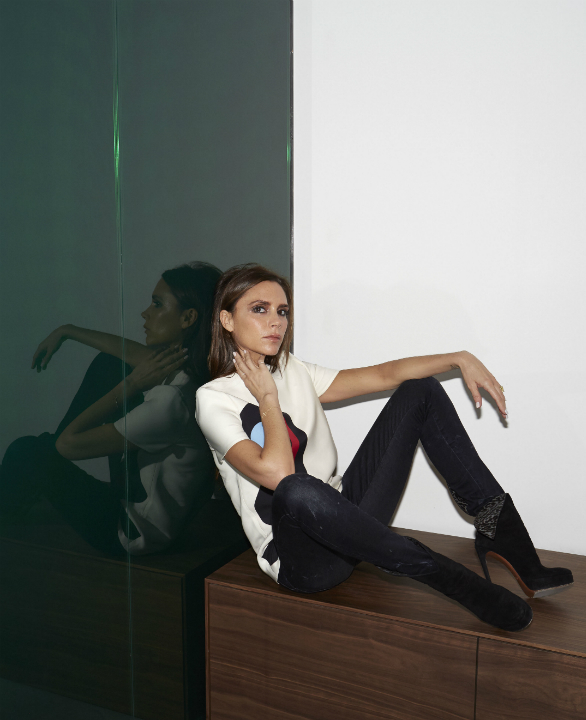