Some ME time during London Fashion Week

It was spring and summer in one week in the Northbank this September as Somerset House hosted the fashion world’s preview of the upcoming seasons’ collections.

London Fashion Week took over the famous courtyard and buildings of the site, with catwalk shows and pop-ups. Meanwhile, savvy local businesses made the most of having the spotlight on the area, drawing fashionistas and celebrities to other parts of the Northbank with their innovative themed promotions.

J Sheekey Oyster Bar teamed up with Champagne house pol roger to offer half a dozen rock oysters and a glass of pol roger pure for £19.75. It says the promotion, which it has also run for previous fashion weeks, is hugely popular. The restaurant already enjoys a high profile: press reports suggest Sienna Miller and Bradley Cooper were among diners during fashion week.

Several Northbank hotels took up the fashion theme with special drinks and dining to get people in the party mood. Corinthia got creative with its afternoon tea, incorporating fancies like ‘glamour’, comprising grand Marnier infused golden fruits. Its Bassoon Bar meanwhile crafted a ‘Catwalk Collection’ of cocktails inspired by autumn and winterfabrics, with names like ‘A Crush on Cashmere’ and a ‘twist of tweed’. The Trafalgar likewise pimped its cocktail menu and also hosted the Nolcha FashionLounge with previews of independent designers and relaxing foot rubs and beautytreatments for those making fashion week pit stops.

Supported by a partnership with Tanqueray Gin, OneAldwych, close to Somerset House, produced ‘Cocktail Couture’, a limitededition bar menu based on famous international fashion houses. It also offeredrickshaw transfers for the press, splashed its frontage with coloured light andput on fashion-themed films in its screening room.

“Fashion editors, buyers and designers always find amoment in their busy schedules to slip away from the main catwalk space toenjoy one of our limited edition London Fashion Week cocktails and bar platesin the Lobby Bar,” a spokesperson said.

“Our in-house florist Mark Siredzuk regularly createsspectacular fashion-inspired floral displays in the Lobby Bar. A few seasonsago, we collaborated with milliner Noel Stewart to showcase his currentcollection and produce a striking installation featuring his hats among eye-catchingflowers.”

The hotel also became a focus for business thisfashion week with private rooms used as showrooms for buyers and press, suitestransformed into blogger hubs and the Screening room a popular choice fordigital presentations.

Happily situated right opposite Somerset House, the MELondon maximised its location. It worked with fashion PR company Felicities tohost catwalk shows from Vielma, Basharatyan V, Ethologie by Jasper Garvida,Charli Cohen, and Linnie Mclarty photo-shoots. It was also the venue forpresentations and press receptions. There were even amusing chocolateinstallations of high heels and lipsticks in the Marconi Lounge. Not only wasthere a resulting increase in the ME’s footfall but a spike in its social mediafigures, as it used twitter, Instagram and Facebook to help push the fun beyondthe fashion crowd.

This was the third time the hotel has got involved infashion week. “It has been mostly done for us to create awareness; fashion isin the DNA of the hotel, we attract a fashionable crowd, so it links well towho we are,” explains director of sales and marketing Markella Votsi.

“The official hotel partner was the Mayfair, so wewere very careful not to use the London Fashion Week branding or name, wecalled it Fashion @ ME London. The project we ran was completely of our ownaccord with a proactive approach. We worked with a PR company who manage a lotof up-and-coming talent and we offered the radio rooftop bar to the press withcomplimentary WIFI and tea and coffee. We got the hotel buzzing, we just wentall out. We brought awareness, and hopefully people will come back another timeand pay for things.”

One local business that was a British Fashion Councilpartner was high end grooming and fragrance shop penhaligon’s, which has itsnearest outlet in Wellington Street. As official supplier to London FashionWeek it helped scent high profile events, this season choosing Samarkand; anexotic fragrance inspired by the ancient city of the same name, “awash withsweet flowers, spices and woods”.

With fashion week back atSomerset House again in February, if you have a business in the Northbank nowcould be the time to start thinking about creating your own opportunities withsome fun and stylish tie-ins. 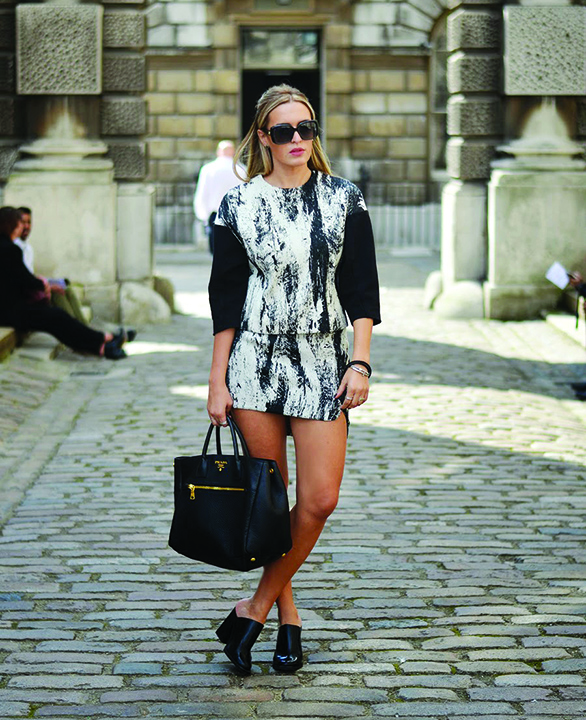