Tales of Glamour and Grit

From mingling with Marilyn Monroe to rubbing shoulders with Sinatra, Sandra Howard’s life has been a never-ending adventure. We meet the model-turned-author at her Victoria home. By Jonathan Whiley

Delving into the life of former model Sandra Howard, I feel like a magpie prising open a treasure trove.

Each anecdotal nugget arrives like a shot glass of glistening jewels, firing the imagination and transporting you to a bygone era of glamour.

Hollywood’s holy trinity – Marilyn Monroe, Frank Sinatra and John F Kennedy – all feature in a life story which captures the showbiz life of the Swinging Sixties.

Cover girl for American Vogue two months running, Sandra worked with some of the world’s best photographers, with the likes of David Bailey, Norman Parkinson, Irving Penn and Brian Duffy among her favourites.

During her heyday, she was undisputedly one of the world’s most beautiful women, with a starry social circle which afforded her close encounters with a smorgasbord of icons.

Such meetings proved the inspiration for Tell the Girl, a book based on Sandra’s life but markedly not an autobiography, which she says would have been “self serving.”

“I just thought to be able to write about two or three years of time was much more interesting,” she says.

“You can put in a little bit more if it’s fiction. Whether it happened to me or not, I’ll leave people to decide.”

It’s mid-morning when I meet the novelist at the Alderney Street townhouse she has lived in with her fourth husband – former Conservative leader Michael Howard – for the past 20 years.

They bought the property, a short walk from Victoria coach station, when Michael was still MP for Folkestone and Hythe, having lived in Chester Row in Belgravia immediately after tying the knot.

It’s a homely place – with cosy sofas, warm furnishings – and the first floor lounge has two huge portraits of Sandra and Michael that dominate the room.

In the toilet there are endless framed cartoons, a Daily Mail front page headline from 2003 which declares “King Howard!” and a slew of awards including a GQ Man of the Year gong.

As we perch on the floral patterned sofa, Sandra enthuses about the cosmopolitan vibe of the area, name-checking Cambridge Street Kitchen and Pimlico Fresh as two of her favourite spots to eat out.

Elegant and well dressed in a burnt orange cardigan, crisp white shirt and knee-high brown boots, Sandra has lost none of her sense of style.

Moreover, age has been a kind mistress, with her relatively unlined features belying her 76 years by some distance.

She speaks softly and has an occasional stammer which she has battled her entire life.

“They say it’s something to do with changing from your left hand to your right [to write],” she says. “My father always blamed himself. It’s one of the theories but there are a lot of theories and there’s not much you can do about it.

“I’ve never been able to get rid of it. I’ve tried and tried; I never know when it’s going to be bad or hardly there at all.”

Her answers are considered, which is perhaps to be expected, given her years in the spotlight as the wife of a prominent politician.

Having worked as a freelance journalist – she is currently writing a travel piece for the Daily Mail on Burma – she is a passionate believer in the freedom of the press.

“When people talk about privacy laws I get very cross,” the mother-of-three says. “I think that would be a slippery slope so I’ve always been prepared to put up with a bit and you learn not to say something too stupid.”

She feels newspaper coverage of Michael’s time in opposition was unfair at times – she didn’t like the comparisons with Shakespeare’s Shylock – and says that it became even more intense when he became home secretary.

If she felt particularly aggrieved, she would write a letter to a national newspaper editor and wouldn’t tell Michael until after she had done so.

“I would stand beside the red box in Pimlico and think, ‘Any sane person would not send this letter’, and then I would shove it in the box and feel better. I just wanted to set the record straight.”

It’s a glimpse into the steely persona that lies behind the gentle features; a side of her personality that she had to employ in September 2002 when she was mugged outside the house one evening.

“I thought somebody had bumped into me at first and then I realised there were two guys and they were holding me down,” she recalls. “They eventually pulled the ring off my finger. I just kept my head down and did as I was told.

“I gather that somebody else was mugged the same evening, about an hour later. She shouted ‘Muggers!’ and they knocked her teeth out, so I think I did rather well really.”

She brushes over the entire experience, but clearly there was some lasting impact.

“I still wander about at night seeing friends but I do walk on the outside of cars,” she says. “It just makes you think, ‘What’s in my bag?’”

Friendly and self deprecating, Sandra carries very little ego despite her starry background.

Her modelling career, it turns out, was a total accident. She had intended to study law but when somebody suggested she consider modelling – and her parents didn’t seem to mind – she embarked on a Lucie Clayton charm course.

“Then I got a very good break when a top model was sick and so I went in her place to do a job with Norman Parkinson,” she says. “That was my street cred and I was off then.”

It was her marriage to the pianist Robin Douglas-Home at 18 – “don’t get married at 18, it’s too young” – that first introduced her to Sinatra.

Robin was keen to write a book about the legendary crooner and through a mutual friend, they met him in London.

“He said, ‘You kids come on out to California. You can write a book about my music but not about me, because I might want to write an autobiography one day.’

“We went off and stayed with him, on and off, for three months. It was an extraordinary time. He was immensely generous with his friends and people who had ever helped him and would look after out-of-work songwriters.

“He did a lot of very kind things and he was very unprejudiced at a time when people were prejudiced and I rather loved that.”

Married life meant that Sandra’s experience of the 1960s wasn’t quite as wild as it could have been, although she did enjoy a spell as a single model in New York following her split from Robin.

“Everybody thinks their decade was the best, but it was very exciting,” she says.

Perhaps the most surreal evening took place in October 1962.

During the Cuban Missile Crisis, as the world held its breath on the brink of nuclear war, Sandra found herself sharing a dinner table with President Kennedy.

“Our ambassador at the time, David Ormsby-Gore, who became Lord Harlech, was a very good friend of Jack Kennedy,” she says. “When he said we were going to supper on a Sunday evening, it was just six or seven people.

“He [President Kennedy] did take quite a few calls but he was always picking up conversation between calls. Then the next day he spoke to the nation.

“It was extraordinary to think that a president, with those sort of pressures, could just have a light-hearted evening meal.”

What did she think of JFK? “He had huge magnetism,” she says. “It was sort of like an avalanche, you couldn’t jump out of its way.”

For a period, mingling with the rich and famous was all part of a rather glamorous day job.

“It was strange on the first day in California, being taken straight to a party where everybody in the room looked so familiar,” she says.

“I realised eventually that they were all people I had seen on screen, like Tuesday Weld and Edward G Robinson and Bing Crosby. And I danced with Bob Hope!”

“She needed to be the absolute focus of attention. She had time for naive teenagers from England and she would talk to me and be normal.

“She was always late and she had this extreme of showmanship and vulnerability. She didn’t really have the confidence on one level, as well as wanting people to think she was the sexiest thing. Which, of course, she was.”

Is the “tortured soul” label a fair one? “Well she was a bit at the end,” Sandra says. “When I met her she was in and out of rehab and Frank was looking after her. He wasn’t sexually involved but he really wanted to help her.

“She was convinced that Jack Kennedy would leave his wife I think and he wasn’t going to and it was all a bit depressing for her.”

Does Sandra think there was ever any chance of romance between Frank and Marilyn? “I don’t really think so,” she says.

“She was a bit of a case really and according to Frank’s valet, George, who was wonderful, she was incredibly messy and Frank was a tidy freak. I don’t think it would have worked.”

I had read that Sandra returned to modelling in the 1990s for M&S, but she plays this down. “Well not really,” she says. “If somebody asked me I was thrilled to do it.

“Now the Daily Mail sometimes has a ‘clothes for the 70-year-old’ [feature] and I don’t mind. It’s terrific, I know what to do.”

“Back then it was more amateur; you could be a bit late, you had to do your own hair and you could turn sideways to the camera if you were a bit overweight. You got away with it really.”

Despite a stellar career in modelling, having a book published remains Sandra’s proudest achievement.

“I had never been to university, never been to a creative writing class, can’t spell, it was agony,” she says. “But all you need is perseverance.”

Now she can’t stop writing. She has one chapter under her belt for a new book set in east Africa and her sixth book – with a working title of Absence ­– is due out in May.

“It’s sort of a sequel to my third book about homegrown terrorism,” she says. “The hero is a young Muslim reporter.”

When Sandra does have time to relax – usually at their house in Kent where they spend weekends – walks, films and “mean Scrabble” are all on the agenda.

Michael also plays tennis. “He is part of an elderly four in Kent,” Sandra says. Is he any good? She pauses. “Well… he enjoys it.” 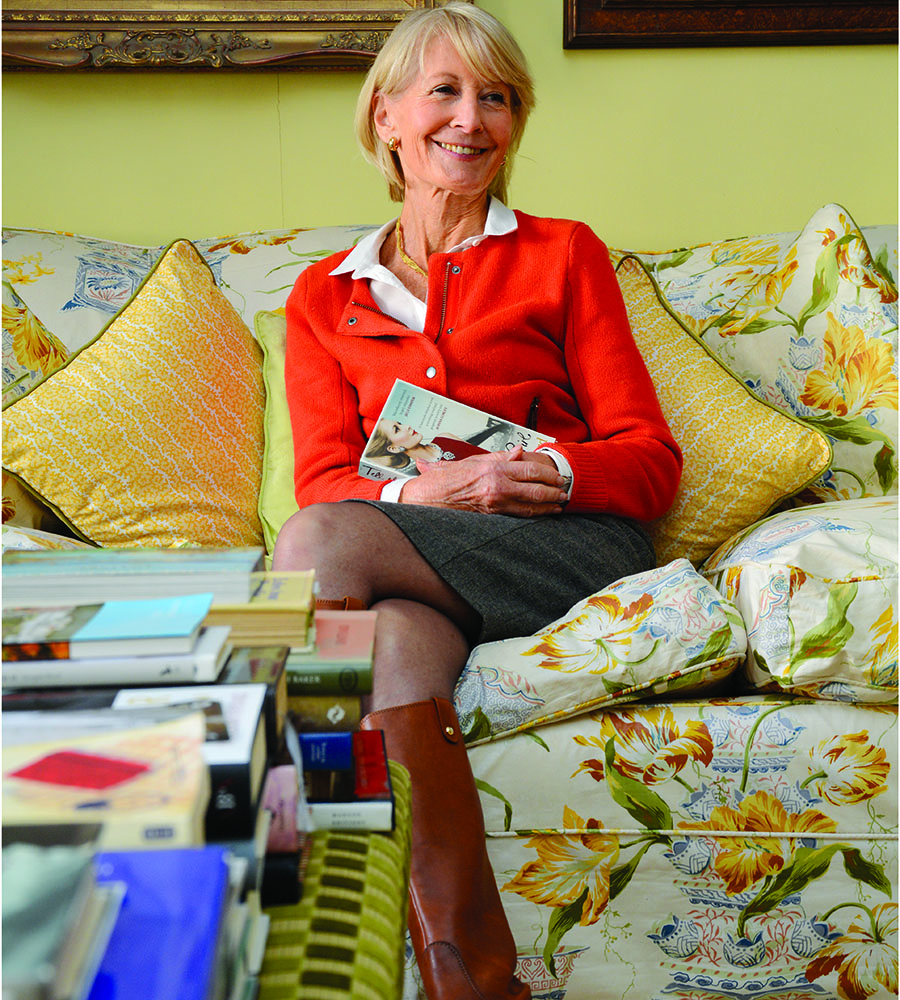