Summer Exhibitions in the Northbank

From tattoo art to Virginia Woolf to fashion illustration, the Northbank’s summer exhibitions are nothing if not diverse. Elena Seymenliyska rounds up this season’s eclectic must-see shows

Seventy of the world’s most influential tattoo artists have been commissioned to create a completely new work for an exhibition on the theme of time. The only requirement? That they must not use their usual surface of skin. The resulting collection ranges from oil paintings, watercolours and traditional Japanese silk painting to paint layering on real skulls and bronze sculpture.

The theme of time is particularly apt for an art form so preoccupied with life and death in all their symbols. From butterflies and blossoms to skulls and Kali, the Hindu goddess of death, many of the original pieces displayed incorporate these common icons of tattoo art.

Tattooing has come a long way from simple stencils hung on the walls of a traditional tattoo shop. Many tattoo artists today come from backgrounds in fine and graphic art, with clients waiting months to be inked by a particular artist.

On display will be new work by influential tattooists from around the world, such as Don Ed Hardy, a formally trained American fine artist turned tattoo pioneer; Horiyoshi III, a master of irezumi, Japan’s ancient art of full-body tattoos; Mister Cartoon, whose style embodies LA street culture and graces the bodies of Beyoncé, Snoop Dogg and Eminem; Filip Leu, a Swiss artist who created a “Western Japanese” style; and the UK’s Alex Binnie, who began reinterpreting tribal tattoos for European clients 20 years ago.

Portraits of the artist

Virginia Woolf was one of the 20th century’s most important and celebrated figures: a novelist, thinker and political campaigner. Despite a Victorian upbringing, she forged new, modernist forms of writing and being, and established the Bloomsbury Group of intellectuals. In novels such as Mrs Dalloway (1925) and To the Lighthouse (1927), she changed ideas about structure, plot and characterisation, and pioneered the ‘stream of consciousness’ style of writing. To this day, her work continues to inspire contemporary authors and has been adapted for both screen and stage.

Curated by her biographer Frances Spalding, this unique exhibition will explore Woolf’s life and work through portraits, photographs, drawings and rare archive material, including personal correspondence. One of the items is Woolf’s ‘suicide note’, a letter she wrote to her sister, the painter Vanessa Bell, shortly before she drowned herself in the river near her house in Sussex in 1941, at the age of 59. The letter is normally held in the British Library’s Manuscript Collection and will be on rare public display during the exhibition. Other highlights include distinctive portraits of Woolf by her Bloomsbury Group contemporaries, Bell, Duncan Grant and Roger Fry, as well as a collection of photographs by Beresford, Man Ray, and Beck and McGregor who photographed her for Vogue. The exhibition will also feature portraits of those she was closest to, including a selection of intimate images recording the time she spent with friends, family and literary peers, as well as one of Picasso’s Weeping Woman drawings, which he created specifically for a fundraising event at the Royal Albert Hall, which Woolf attended.

The beauty of movement

Poppy Waddilove is a young London-based artist whose fashion illustrations draw on influences such as 1940s and 1950s style, Japanese culture and classic films. Described by Grazia magazine as the rising star of the London fashion scene, her work has been used in both luxury catwalk shows and glossy magazine spreads. Now the Strand Gallery is launching a solo exhibition of her elegant artworks in pastels, oils and charcoal, timed to coincide with London Fashion Week.

Waddilove’s stylish pieces are inspired by the notion of movement. Whether a sudden gesture or a moment of reflection, she twists and contorts the women she draws to show emotion and poise. “I am inspired by the line of the body and spontaneity of movement,” she says. “I paint quickly, intensely, and ultimately aim to create a timeless elegance in the women I portray.”

Here’s a novel concept for an exhibition: not a particular artist, period or style, but colour itself, one of the very building blocks of art. From lapis lazuli to cobalt blue, the National Gallery will embark on an odyssey through the story of colour. Visitors can learn about the surprising materials used to create pigments (such as crushed insects and sparkling minerals) and the incredible journeys made by artists in pursuit of new hues via a series of colour-themed rooms, culminating in a dazzling central space devoted to gold and silver. An interactive display will also introduce the latest scientific experiments revealing the unexpected ways in which the eye and brain respond to colour. The exhibition spans hundreds of years, and includes National Gallery paintings alongside special loans of mineral specimens, textiles, ceramics and glass. 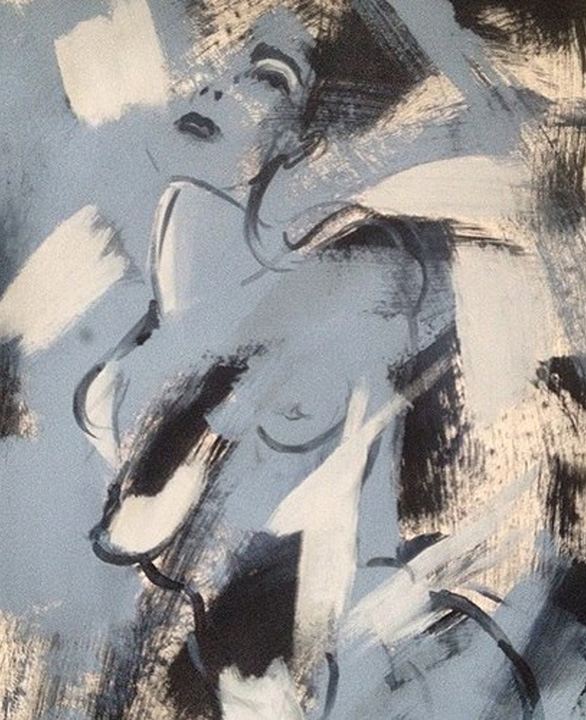