Nowhere is the enduring spirit of the world’s most famous consulting detective more alive than at the Sherlock Holmes Society of London. Corrie Bond-French went to investigate.

The clatter of hooves on gaslit cobbles, the tap of a cane on a hansom carriage roof, tendrils of fog curling around lampposts and the bustle of Baker Street; the evocative world of Sherlock Holmes’s London needs little introduction.

It is now 125 years since the first appearance of Sherlock Holmes in The Strand Magazine, yet the world’s most famous fictional consulting detective continues to fascinate.

Stories still abound of men wearing mourning bands when creator Sir Arthur Conan Doyle killed off his most popular character at the Reichenbach Falls, only to bring him back to life to great acclaim when finances dwindled.

And there is, of course, the appeal of the name. Sherlock Holmes was very nearly Sherringford Holmes or Ormond Sacker, but in the end Conan Doyle, himself a first-class cricketer, apparently named him in honour of Nottingham cricketers Sherwin and Shacklock.

Given the continued appeal of the adventures of Holmes and his friend Dr Watson, it is little surprise that the Sherlock Holmes Society of London has a busy schedule of events and a thriving membership.

And with landmark buildings from the original stories still in existence, the Society is able to forge and retain links with Holmes’s London. One such building, The Sherlock Holmes pub in Northumberland Street near Trafalgar Square, has a particular claim to fame.

Established in 1736 and formerly known as the Northumberland Hotel, the pub famously featured in Conan Doyle’s 1901 classic novel The Hound of the Baskervilles – where Holmes and Watson met with Sir Henry Baskerville.

The venue is also home to a Sherlock museum, which features rare memorabilia including original theatre posters, Watson’s old service revolver and the stuffed and mounted head of the hound of the Baskervilles.

The collection, designed with the support of Sir Arthur Conan Doyle’s family, is maintained by the Society.

The Society itself was founded in London in 1951, by a small group of enthusiasts who had helped to create St Marylebone Borough Council’s distinctive contribution to the Festival of Britain – a Sherlock Holmes exhibition. This was the brainchild of the Borough Reference Librarian, who persuaded councillors that it was more appropriate than an exhibition on slum clearance.

The Abbey National Building Society’s headquarters, Abbey House, occupied the site of the only house that ever legitimately bore the address 221 Baker Street, and a member of staff had, since the 1930s, been responsible for answering the thousands of letters addressed to Sherlock Holmes at 221B Baker Street. Abbey National provided the space for the exhibition, which ran for five months and attracted more than 54,000 visitors.

With a current membership of more than 1,200, the Society is open to anyone with an interest in Sherlock Holmes, Dr John Watson and their world.

“The obvious benefits, I suppose, are the meetings and the twice-yearly Sherlock Holmes Journal,” says Sherlockian Roger Johnson, Society press officer and co-author of The Sherlock Holmes Miscellany.

“The latter has been published without interruption since 1952 (effectively disproving the belief held by some that everything that could be written about Sherlock Holmes had already been written). We take it for granted that our readers are capable of believing simultaneously that (a) Holmes and Watson are the fictional creations of Arthur Conan Doyle, and that (b) they are real historical persons with lives of their own. An issue of the Journal, therefore, may feature serious literary or biographical scholarship alongside articles that examine the details of the stories as if they were factual accounts. There will also be reports of the Society’s activities, a humorous column and a cartoon or two, reviews, readers’ letters, and – all too often – obituaries.”

So can Roger define the enduring appeal of Holmes and Watson?

“For me, a deep interest in the late-Victorian and Edwardian period is an important element, including the history of crime and detection. I once defined it, rather preciously, as nostalgia for a time I never experienced,” he says.

“Part of the appeal, I think, is the fact that Holmes is not a superhero. His powers are entirely human. When we read the stories or watch the films we think, Yes, I could do that if I really tried – and there are a dozen or so books in print that purport to teach us ‘How to Think Like Sherlock Holmes’. Moreover, being human, Holmes occasionally gets it wrong, which makes him just that little bit more like us.

“Holmes and Watson are a partnership, but Watson is the one that we’d really like to meet, to chat with over a drink or two. The difference between them is not just the gap between talent and genius (and Watson is no fool, although he’s sometimes portrayed as one). The difference in temperament is important too, and it’s been very well depicted on television in Sherlock and on the big screen in the Guy Ritchie films.
“Finally, and perhaps most importantly, the chronicles of Sherlock Holmes are damn good stories. Well over a century after the first one was published, we still read them for pleasure – because we want to, and not just because they’re included in a school syllabus.”

It will come as little surprise to hear that the Society played its part in the most recent revival of Sherlock on screen.

“In his speech, Mark told us of their mad idea for an updated Sherlock Holmes series … Perhaps he expected a hostile response. I hope not, but in any case their love and deep knowledge of Conan Doyle’s stories was so obvious that the reaction was more along the lines of, ‘Interesting – and it might work!’

“Six years later it was Steven Moffat’s turn, and almost his first words were, ‘Thank you – for letting us live …!’ The Society’s reaction had confirmed their belief that the idea that eventually became Sherlock really was a good one.” 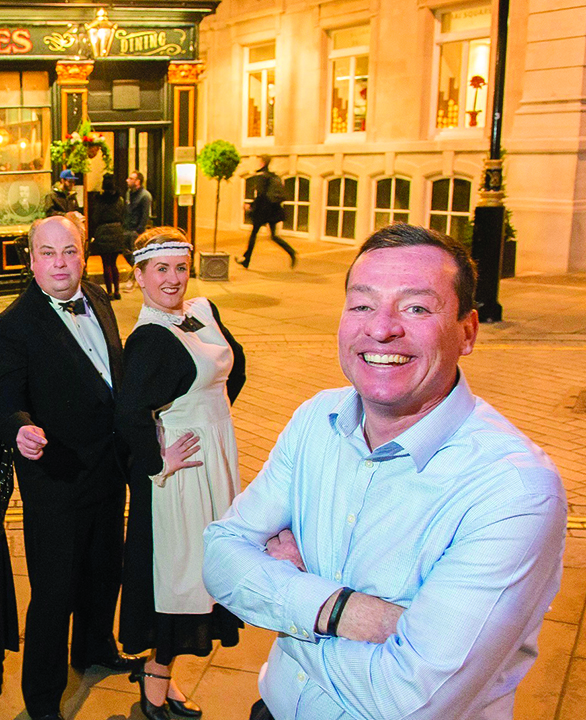