HE’S KNOWN AS ONE OF THE HARDEST-WORKING STARS IN HOLLYWOOD, YET SAMUEL L JACKSON STILL MANAGES TO KEEP HIS CHARITABLE ACTIVITIES ON A PAR WITH HIS ACTING CAREER.

The St James’s Hotel and Club is a discreet luxury hotel tucked away up a side street in St James’s – not your normal paparazzi hangout. But when one of the coolest actors on the planet takes over the entire building for two days, there’s very little in the way of normality.
Samuel L Jackson, the star of films such as Pulp Fiction, Die Hard and Star Wars, is in town to host The Shooting Stars in Desert Nights Benefit and golf day in aid of the Rainbow Trust Children’s Charity – and he’s accompanied by an A-list cast of personal friends including singers Alice Cooper and Natalie Cole and actors Don Johnson, Luke Wilson and Don Cheadle.
A stream of photographers and journalists wanders in and out of the hotel and every so often, a delivery of golf equipment or golf clothes arrives for the celebrity guests. Samuel eventually appears, feeling shattered. He’s been in interviews all day having had very little sleep the night before but is in good spirit and jokes around in between changing outfits for the Mayfair Times photo shoot. He’s here to talk about his involvement with the Rainbow Trust as well as the Samuel L Jackson Foundation.
“I set up the foundation over two years ago just to be able to give money to educational organisations, Aids institutes and people with individual needs,” he says.
“There were years when I needed things and occasionally, thanks to somebody helping, things would come – and now it’s just a blessing to be able to do the very same thing and not ask for anything in return.
“Sometimes, I’ll be sitting at home just watching the news and I’ll hear a sad story. I’ll make a call somewhere and ask for some money to be sent to these people and they don’t necessarily have to know who it is – I just do it.”
Samuel L Jackson is as cool off screen as he is on it – and an incredibly nice guy too who, despite the intense characters he plays, doesn’t take himself too seriously. He starts the interview standing up, a huge figure towering above me, which makes me feel slightly nervous. “Don’t be nervous – I’m smiling,” he reassures me. “I’m not standing over you growling,” he adds, making a growling noise.
Samuel hopes the charity golf tournament at Fulham’s Hurlingham Club will become an annual event. “We’re hoping to move it from venue to venue and from city to city,” he says. “Hopefully it will grow and become something special. It gives me the opportunity to see a lot of different places and play a lot of different kinds of golf courses, which is awesome.”
Labelled as one of the hardest-working actors in Hollywood, Samuel’s films (68 in total) have grossed £3.94 billion at the box office, more than any other actor in the history of film-making, according to the Guinness World Book of Records 2009. Had he not been an actor, he would have liked to have been a marine biologist. “I always wanted to hang out underwater – be alone, probably as a result of being an only child,” he says.

Born in Washington DC in 1948, Samuel grew up as a Protestant in a segregated community in Chattanooga, Tennessee, with his mum, grandparents and aunt. He considers himself to be “spiritual” rather than religious. “I mean, I pray,” says Samuel, who played the Bible-quoting hit man in Quentin Tarantino’s Pulp Fiction.

In real life, he’s a far cry from the tough-guy roles that have brought him fame and fortune and admits he’s a big child at heart. “All boys are,” he says. “That’s why we like action movies – we get guns, we get to run, we get to jump. We get to do all the stuff that boys like to do. I never think the characters I play are that nasty – they are just guys who have an agenda.”
He says the character he has most enjoyed playing was Zeus in Die Hard. “I had a pretty good time being that guy because I could just kind of be myself,” he says.
What has been his most satisfying role? “Hmm, satisfying? Let me think. Probably The Red Violin (in which he plays a violin appraiser) because I liked the role, I liked the character a lot and I think I accomplished all the goals I wanted to accomplish without it seeming contrived.”
Samuel says he’s happiest when he’s working. “Work is my fun place to be,” he says. “When I’m acting, it’s a beautiful day because I get to go out and stop being me for a moment and turn out the noise of Samuel L Jackson’s life – all the phone calls and that controlled environment.”
Aside from his own film company, Samuel also has a television production company. “I’m trying to create shows and create jobs for people, so I’m talking to a lot of interesting writers and people with all kinds of ideas,” he says.
Samuel, along with his wife LaTanya – also an actor – spends a lot of time doing his bit for civil and human rights and was involved in the Obama election campaign. “They took a lot of my money,” he laughs, “and they’re already saying 2012 is coming. I said, ‘What – so soon?'”
I ask how he felt at the inauguration ceremony. Was it emotional? “No, not really,” he says. “I was shocked at how brief it was. You spend a lot of time and effort getting to those particular places – you get there, you sit there and freeze for two hours and it’s over in 20 minutes. And that’s it. But it’s something to say you’ve been to.”
Despite his involvement in the Obama campaign, Samuel has no desire to become a politician. “I have too many skeletons in my closet to be a politician,” he says.
When he’s in London, Samuel enjoys wandering around, interacting with people – and he loves to dine out. “I eat out over here in London more than I do in LA,” he says.

“Things have changed – you’ve got really good restaurants. I love Asian fusion food and whenever I’m in London, I eat at Hakkasan. I’ve also learned to like Indian food since I’ve started coming here. I think Tamarind is great. I also love Marcus Wareing at The Berkeley – I like the interesting blend of tastes and textures and even the colours on the plate – they draw you to the food. That’s kind of unusual for me because I’m usually drawn to food by smell.”

Shopping is another favourite pastime when he’s in town. Known for his casual elegance, he cites “Mr Armani” as his favourite designer. “I wear Armani and Adidas all the time – if I’m not wearing one, I’m wearing the other,” he says.
“I think London still has some of the most trendy clothes in the world. I like roaming around, just looking in the windows and imagining. I go down the King’s Road and think, ‘Ah, I used to look like that’, or, ‘I wish I could still wear that’. I’ve outgrown a lot of the clothes I would normally wear but I like seeing other people in them.”
One gets the impression that Samuel would look cool whatever he wore at whatever age. In fact, it must be pretty cool all round to be Samuel L Jackson.
“Yes, it’s pretty cool,” he says. “I can get up, kind of figure out what my day’s going to be and enjoy it. I try to get the most out of every day – and try not to be brought down by things. Sometimes, I just avoid watching the news because I don’t want to hear what’s going on. But I guess it’s pretty fun to be me.

“I never crave normality – who wants to be normal? Some days I leave home and go out and see how many people recognise me just to make sure I’m still special. I often ask myself, am I really special or am I just fooling myself?” 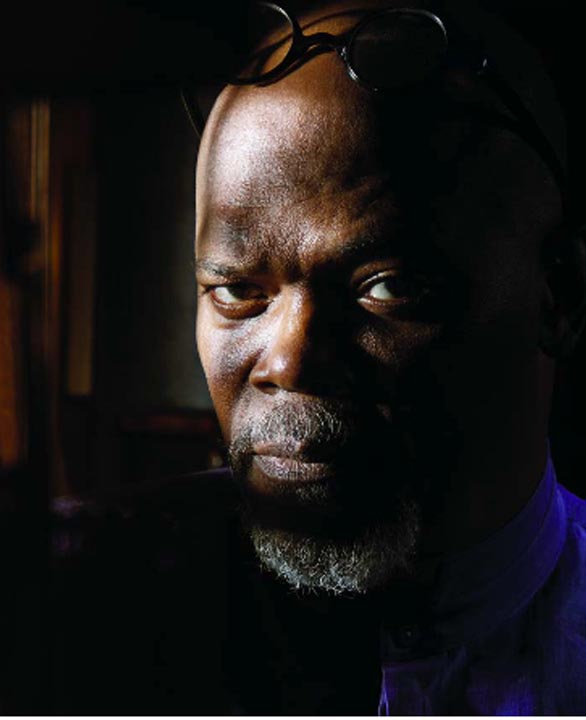