Sixties fashion model and Vogue cover girl Paulene Stone has lived in Belgravia since 1974. She talks to Kate White about her remarkable life in Swinging London.

Paulene Stone has led an extraordinary life. A fashion model and three-time Vogue cover girl, she rose to fame during the 1960s, rubbing shoulders with many glittering names of the day and creating some of the decade’s most enduring images.
Stone was born in Hove in 1941. Her mother was a talented dressmaker with Katharine Hepburn looks, while her father was a commercial artist. She fell in love with fashion at a young age, and quit school aged 16 with aspirations to become a model.
She took a holiday job at a knitwear wholesale business in the local town, on a vague promise that it might involve some modelling work. “Well, I soon realised there was none, and I ended up stacking shelves,” laughs Stone, who with her large eyes, enviable cheekbones and delicate features, still looks every inch the model.
One day, the owner’s daughter spotted an article in Woman’s Own, which invited readers to enter a modelling competition. “She said, ‘You’ve got to send a photograph of yourself,’” recalls Stone. “So I trotted down to the high street photographer and had an absolutely terrible picture taken. I sent it off, and I won.”
The prize was a three-week modelling course with the prestigious Cherry Marshall Model Agency on Jermyn Street. Marshall, a former model herself with a 22-inch waist, became famous in the 1950s under the moniker Miss Susan Small. “Cherry was wonderful,” says Stone. “She really pushed me.”
Soon tiring of the daily commute to London, an 18-year-old Stone packed her bags and moved to the big smoke, taking a room in a boarding house on Cranley Place in South Kensington. Armed with an A to Z and a Tube map, she quickly settled into London life. The city was very different back then, she says.
“I actually remember the last pea souper we had. I was driving to my boyfriend’s house, and the fog was so thick. I drove down Buckingham Gate to turn left into Petty France and accidentally turned into Buckingham Palace, because in those days they just left the gates open. A policeman came up with a big hand through the fog and said, ‘’Ere, where do you think you’re going?’”
Stone’s modelling career began to take off in a big way. In 1960, aged 19, she was snapped posing with a squirrel by David Bailey for the Daily Express, in an iconic image that is credited with launching the photographer’s career. She landed her first Vogue cover three years later, and went on to grace the front page twice more.
The King’s Road was the epicentre of the Swinging Sixties, and the atmosphere was “fabulous”, says Stone. “There were so many individual shops – Granny Takes a Trip, Top Gear, Countdown. By the time I was really hitting the King’s Road, I was dating Laurence Harvey. We would go down in a chauffeur-driven car, and people would stop to catch a glimpse of him. It always seemed to be sunny, and I’d be wearing my shortest hot pants or a miniskirt.”
Stone met Harvey – whom she affectionately calls Larry – through her journalist friend Peter Evans. “He said, ‘I’m having drinks with Laurence Harvey at The Connaught tonight, why don’t you come with me?’ Well, I’d seen him in Darling, and his character was so sleazy and horrible. But Peter persuaded me, so I went along. Larry opened the door of his suite and I just thought, ‘Wow.’ He was very tall, very handsome and great fun.”
Harvey “had one foot in old Hollywood, and one foot in new Hollywood”, says Stone. He made two films with Elizabeth Taylor, and the couple socialised with her and her husband Richard Burton. “Richard was hypnotic. He had amazing green eyes,” she says. “When he talked to you, he would just lock onto you.”
Then there was Sammy Davis Jr, Peter Lawford, Leslie Bricusse and his wife Evie, Michael Caine, Terence Stamp, former model Sandra Paul (now married to the politician Michael Howard) and Joan Collins, who is “wonderful”, says Stone. “She’s so much fun.”
The couple married on New Year’s Eve, 1972, but tragically Harvey died of cancer just 11 months later. “He was only 45 and we didn’t know he had it,” says Stone. “It was very sad.” They had one daughter, the bounty hunter Domino Harvey, who died in 2005. A film based on her life, starring Keira Knightley and directed by Tony Scott, was released the same year.
Stone has another daughter, Sophie, from her first marriage to Take 6 fashion-chain founder Tony Norris, and a son, Harry, by her third husband Peter Morton, who co-founded the Hard Rock Café. Her fourth husband, the actor Mark Burns, passed away in 2007 after a struggle with cancer. Stone herself has battled the illness three times. “I feel lucky that I’m alive,” she says.
Despite being a model, Stone doesn’t wear many fancy clothes. “I like to wear separates. I never wear a dress. I’ll put on a sweater and jeans, or a T-shirt in the summer, with a nice jacket. I’ve always spent a lot of money on accessories, but I’ve never really gone in for fancy outfits, probably because when I was modelling, I was wearing them all day.”
Scoring her first Vogue cover was a thrilling moment, she says. “I was quite chuffed, but I took it all in my stride. My mother was very proud – she kept all the cuttings.” Modelling was very different in the 1960s, she adds. “In those days you didn’t have a make-up artist or hairdresser. You even had to provide your own shoes – a neutral pair and a black pair.
“You had to do it all yourself, and you had to be pretty perfect too, because they didn’t retouch. There was none of this Photoshop stuff, thank you very much. Everything is so smoothed out now, I can’t believe it. We didn’t have any of that – we were the way we were.” 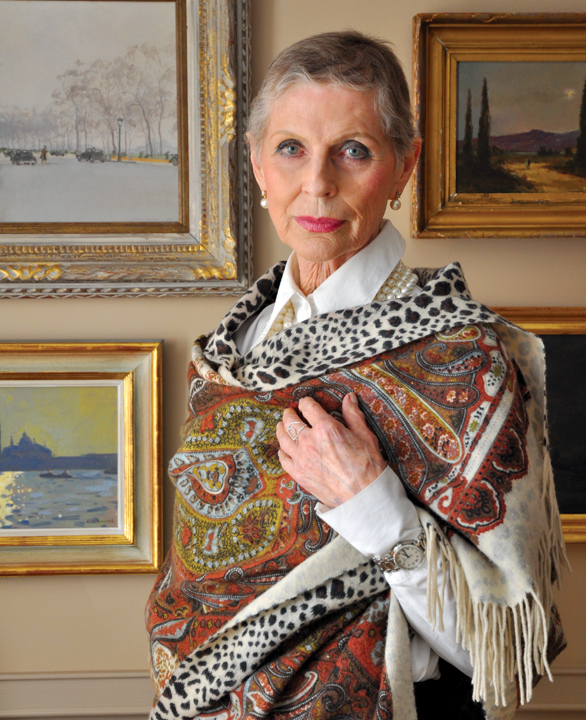