In three short years, Ade Hassan’s accolades are coming in thick and fast, with Beyonce even a fan. But how did she take her lingerie for women of colour to such meteoric levels?

Ade Hassan, founder of lingerie brand Nubian Skin, opens a letter congratulating her on being awarded an MBE.

She phones her mum in Lagos, Nigeria, who replies: “You got it for pants!?”

Sounds logical, but the lack of choice available in major department stores for darker skin tones is still glaringly apparent.

In just three years, the brand has catapulted to achieve international recognition, with Ade winning Fashion Entrepreneur of the Year at the Great British Entrepreneur Awards, to Beyoncé wearing her lingerie and now winning an MBE for services to fashion.

“I always said this isn’t just a fashion brand, it’s a movement,” says Ade, 33, who now lives in Belsize Park with her husband.

“It’s about empowering women to embrace their differences.”

Growing up without the right shade of “nude” lingerie isn’t something you would expect to find in countries like America and Nigeria, but Ade, who has lived in both before settling in London, noticed the lack of choice first-hand.

“I once found this brown bra, it wasn’t even the right shade of brown, but I wore it to death!” she laughs.

“America is actually our biggest market, if you can believe it, I know, a country the size of America didn’t have lingerie for women of colour – it’s shocking.”

Nubian Skin was therefore born out of Ade’s frusrtation with the options available to people with darker skin tones.

“When you go into underwear departments, the ‘nude’ they offer is one basic shade and the only option for people with dark skin is a pair of black tights,” says Ade.

“I had no experience of the fashion industry but I had a clear idea about what I was going to do, and I set out to achieve it.

“I went to make-up counters that cater for darker skin, like MAC, black Up, Fashion Fair, and matched up foundations with a Pantone wheel because the factories didn’t have any of the colours already.

“I thought after getting the underwear colours right, tights would be straightforward, but of course tights are sheer and the colours don’t match up in the same way, so I was in my kitchen dying tights in rooibos and black tea, giving them to friends to test out!”

Using real-sized models was a prerequisite of Ade’s branding, something that has garnered acclaim for daring to be different.

“I wanted the imagery to look like people you know – your friend or family member – the real people who will be wearing the lingerie,” Ade adds.

“I couldn’t believe it when when of my models told me she was going over to America to be a plus size model, and she was a size 10!

“But I think we are in the midst of a change – women are feeling able to be empowered by who they are.”

“I am very proud to be stocked in Fenwick on New Bond Street – it’s good to know that people in Mayfair are able to find my tights there when they need them,” Ade says.

Ade is aware of the growing Nigerian community in Mayfair, even bumping into family members when visiting the area.

She explains: “I was in a shop on Curzon Street and my uncle who lives in Nigeria, had just walked past, so I ran outside to grab him!”

Being Nigerian is a huge part of Ade’s life, from having a traditional Nigerian wedding to celebrating cultural festivals – and living in London hasn’t stripped Ade of any of her heritage.

“Nigerians are really proud people,” she laughs. “We claim anyone who is even a little bit Nigerian, if they’re known for doing something good.

“And we’re naturally very entrepreneurial, which is why I think I get my drive from my parents who have always been entrepreneurs.”

Ade’s natural entrepreneurial spirit is transporting the business to new heights, but for her, there is still lots more work to do.

“I want Nubian Skin to be a household name, the brand that people who need skin-tone undergarments immediately think of when they think of tights and lingerie,” she says.

“I also want to continue to create more colours and different styles and though we’re currently stocked in Nigeria, I want Nubian Skin to be in more African countries.”

The movement has begun. 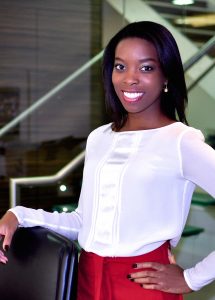