It helps to keep a calm head in the hectic world of pastry, as The Delaunay’s Regis Negrier knows only too well. By Jonathan Whiley

In the world of pastry, it’s a cruel irony that the last thing a chef can afford to be is flaky.

While it may take a delicate touch to assemble a perfect croquembouche, it takes nerves stronger than praline to continue to do so time after time.

Regis Negrier, head of creative development at popular Northbank brasserie The Delaunay, knows that learning the craft is much more than just sugar, spice and all things nice.

Early in his career – as a pastry chef in a small Michelin-starred restaurant in France – he worked under a young chef who struggled to control his passion.

“When things were not going as he wanted them to he would throw the plates or pans across the kitchen,” Regis recalls in an accent which, after 12 years in the UK, remains as thick and French as Normandy butter.
“I think it was just the stress; he [the chef] was so passionate.”

It’s a level of passion that seems at odds with the cosy, aggressively middle-class image cultivated by The Great British Bake Off where a crisis (cue sharp camera angles and dramatic music) is manufactured from a solitary soggy bottom.

And yet there remains – despite Channel 4’s intervention – great affection towards the act of baking, with millions of us routinely falling in love with the artistry and romanticism that accompanies a perfectly baked tart.
Regis is no different. Ask him to recount the first ever pastry he tasted and his eyes light up a little. He was five and his father – a former baker turned policeman – bought éclairs from their local patisserie.

“I remember the vanilla,” he says. “Because nobody does it any more.”

Regis first set his sights on being a firefighter until one day, aged 10, he watched his mother baking and decided that’s what he wanted to do as a career.

He would go on to work in boulangeries, patisseries and Michelin-starred restaurants and also spent time as a chocolatier.

It was a path that would take him across the world, from Milan to Mauritius, Seoul to Beijing, working for established hotel chains such as Forte, Hilton and Kempinski.

His first job in the UK was at the Grosvenor House Hotel in Park Lane, joining the team without any grasp of English.

“Like many arrogant French people I thought I shouldn’t learn English – why should I?” he says.

Regis soon recognised the importance of learning the language and spent time as head pastry chef at the Waldorf Hotel before moving to The Wolseley, a Corbin & King venture, in 2005.

Six years later, with Corbin & King’s empire expanding, Regis returned to the Northbank with the launch of The Delaunay, heading up a 12-strong pastry team.

“Here we do a lot of Austrian, German or Eastern European pastries, but we tweak the recipe a little and I think we make it a little better,” he says.

Behind Regis in the Delaunay Counter is a huge glass cabinet full of beautiful pastries that glisten under the lights. The choice seems endless. Does he have a favourite?

“I like Kirsch very much so I like the Black Forest [gateaux],” Regis says. “We do it very classically here: sponge, whipped cream and a sour cherry compote.

“When you go to the Black Forest region, they are huge. When you finish your portion you are almost pissed.”

“But that’s life. With cakes and so on I just try a little bit to taste. If I do tastings in other places for the company I just take a scoop – or maybe two.”

Regis takes me down to the kitchen and shows me the pastry section where chefs are beavering away. “Now, with my grey hair, I don’t shout any more,” the 54-year-old says. “I raise my voice from time to time, but I don’t shout. I try not to because I think it’s not right.”

It may be calm, but it’s hectic. Regis says that there’s a big programme planned for Christmas, which he’s gearing up for.

“We are looking at about 250 to 300 gingerbread houses in three different sizes.

Regis tells me that David and Victoria Beckham call in at the restaurant from time to time – on one occasion a marshmallow was so good Victoria shared a picture of it on social media – and it’s clear that high-profile guests are treated accordingly.

As I make my way back up the stairs between the restaurant and kitchen, I pass a board with the names and faces of celebrities and notable names who dine at the restaurant regularly.

Next to each of them is a set of meticulous notes on their preferences – a glimpse, perhaps, into what continues to put The Delaunay firmly on the map. 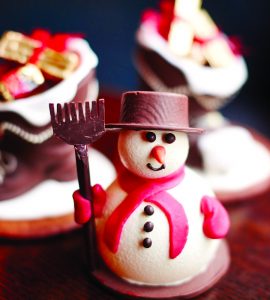