Joan Collins – A Passion for Life

She is the last word in glamour and has perfected the art of longevity in a world of 15-minute fame. So how does she do it?

I’m sitting on Joan Collins’s sofa in her Belgravia flat discussing the concept of glamour. ‘What is glamour? Well, you’ve either got it or you haven’t,’ she says.

‘I’ve seen women walking down the street covered in sequins and dangly earrings and lots of make-up, and they’re not glamorous at all, and I’ve seen women in a pair of pants and a shirt, and they are glamorous, if you know what I mean.’

Whatever that elusive quality is, one thing’s for sure ‘ Collins has got it in spades. The legendary actress, who is probably best known for playing super-bitch Alexis Carrington in the American TV series Dynasty, looks positively luminous.

Dressed in a chic leopard-print blouse and sand-coloured trousers, she seems to somehow defy age. What is her secret? ‘I take very good care of my skin,’ she says. ‘I never go in the sun with my face, although I do with my body.

‘I always use plenty of moisturiser and night cream, and I always wear make-up during the day. It’s the best protection there is.’ She also watches her weight, works out with a trainer and can even do the splits.

Collins bought her flat in Belgravia in the late 1980s. ‘I looked at about 60 flats in London,’ she says. ‘I wanted to be near to the West End and the theatres, and near to Chelsea. I love Belgravia, it’s wonderfully quiet.’

She enjoys visiting the local shops, mentioning Walden Chymist on Elizabeth Street and Belgravia Books on Ebury Street. ‘Then you’ve got Waitrose and Mayhew the newsagent just around the corner,’ she says.

Children’s shop Semmalina just off Orange Square is another favourite, and she’s a fan of Nicky Haslam and Philip Treacy, too. However, one thing she’s not so keen on is the number of people building mega-basements under their homes.

‘I think there’s too much building work going on, I’m afraid,’ she says. ‘It’s really sad, and I find it shocking that people are digging down to put in swimming pools and bowling alleys when they only live here for two or three months of the year.’

Collins has just penned a new autobiography called Passion for Life, a rollicking good read that offers a highly entertaining journey through her extraordinary life and career.

It’s full of juicy anecdotes about past boyfriends (including the legendary Hollywood lothario Warren Beatty) and husbands (she’s had five). She’s now happily married to Percy Gibson, who is 32 years her junior.

Explaining how she chose the title of the memoir, she says: ‘I think it represents what’s in the book ‘ my passion for lots of things: for my children, for my husband, for some boyfriends I’ve had, for my homes. I’ve had 50 homes in my life.’

How would she describe herself as a person? ‘I’m fiesty, outspoken. Amusing, I think! I’m highly optimistic and very, very positive. I never let anything get me down for long. I’m not a wallower. I only like to wallow in bed with lots of cushions and newspapers.’

Collins was born in Paddington in 1933, the eldest daughter of Elsa Collins, a dance teacher, and Joe Collins, a variety agent. The family home in Maida Vale was always ‘full of performers’, and a typical Christmas would see the house filled with singers, comedians, celebrities and magicians.

Collins was ambitious to go into showbiz from a young age ‘ ‘Although I changed my mind a few times,’ she says. ‘I wanted to be a detective for a while, and then I wanted to be a dress designer. I still design a lot of my own clothes. But eventually I went back to wanting to be an actress.’

She made her film debut in 1951 and was signed by 20th Century Fox in 1955. In the same year she replaced Marilyn Monroe as the sultry lead in The Girl in the Red Velvet Swing. ‘I met Marilyn once standing at the bar at Gene Kelly’s house, and we had a conversation,’ she says.

‘She was very quiet, whispery, shy. She said, ‘They wanted me to play the lead in The Girl in the Red Velvet Swing, but I’m too old.’ She was then 30, and I was about 20. She warned me about the wolves in Hollywood, particularly the studio bosses. She was very sweet.’

In the 1980s Collins scored the biggest role of her career, as the man-eating femme fatale Alexis Carrington in Dynasty. It was undoubtedly her favourite part, she says. ‘I played Alexis for nine and a half years, and I found all kinds of different facets in her character. I loved her clothes.’

Her role in the hugely popular soap made her the highest-paid actress on television for a time, and she appeared on countless magazine covers. Nevertheless, she was realistic about the attention that Dynasty brought her. ‘I realised it wasn’t going to last,’ she says.

‘A reporter said to me once: ‘How will you feel if all this ends?’ And I said, ‘It’s not a question of if, it’s a question of when.’ Careers don’t last forever, and if you expect them to, and you hang onto past glory, you’ll only become sad and bitter and jealous.’

While fame is generally a fleeting thing, Collins’s career has endured. How does she explain her longevity? ‘I have no idea,’ she says. ‘Possibly it’s because I don’t care a bit about being famous.’

‘Really?’ I ask. ‘I honestly don’t,’ she says firmly. ‘I never did, and in fact, when I go round the shops, which I love to do, I will dress in a suitably ‘down’ mode, so I don’t get recognised. I don’t see particular advantages in being famous, other than being able to get the best table in a restaurant.

‘I’m always astonished by the fact that so many people today want to be famous. I always wanted to be successful, first as an actress and then as a writer, but fame for fame’s sake doesn’t interest me.’

She feels sorry for young celebrities today. ‘I think to be young and famous now is quite hellish, because once you step out of your home, your life is not your own. They are hounded. My goddaughter Cara [Delevingne] lives in Belgravia, and she gets followed all the time.’

What was Hollywood like during the golden era of the 1950s and Sixties? ‘It was a fabulous time,’ she says. ‘People embraced life. People were not hounded by the paparazzi ‘ and when I say people, I’m talking about the Steve McQueens, the Natalie Woods, the Paul Newmans, the Marlon Brandos. People that I knew.

‘We had quite a bit of freedom to go out, to go to restaurants. There was televison, but it wasn’t very interesting back then, so people didn’t rush home from parties every night to go and watch it.

‘People didn’t have the lavish houses that they have today, either. Today, stars have everything from tennis courts to swimming pools, and they’re insulated in their own little world.’

Collins, who has three children and three grandchildren, divides her time between her four homes in Belgravia, the south of France, New York and Los Angeles, where she plans to spend Christmas with her sister Jackie and family. In February she returns to the Leicester Square Theatre with her one-woman show, One Night with Joan, and has two new films out, Saving Santa and Molly Moon: The Incredible Hypnotist. She’s also considering penning another novel.

Clearly there are no plans to retire just yet, I say. ‘Retirement? What does that mean?’ she laughs.

Passion for Life by Joan Collins is published by Constable. 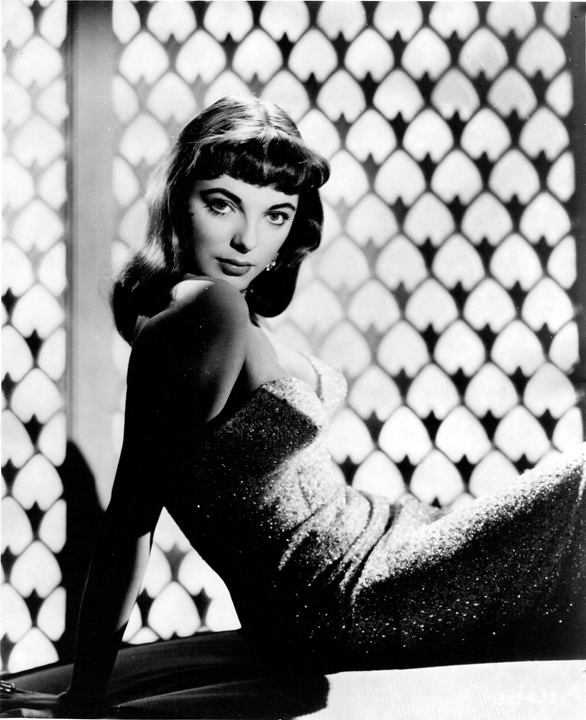