For our art special, lucy douglas speaks to four Chelsea artists about their inspirations and how this beautiful corner of London influences their work.

Luke Martineau’s work spans landscapes, portraits and still life painting, as well as some illustration and design work. He splits his time between his homes in Shepherd’s Bush and Exmoor. He is president of the Chelsea Art Society

“I grew up in Kensington, and then I went to art school at Heatherley’s, both before and after university. And I lived in Earl’s Court in the early days. Chelsea has been very much part of me – it’s been a kind of home all my life.

“When I’m in London, the Thames is the go-to place for me. Painting along the Chelsea Embankment, from Battersea Bridge, from the parapet of Chelsea Bridge, all around that rectangle of the river. All of those views are cracking. And painting water for me is important. It’s something I’ve always done.

“When I was first painting as a boy, I got into the idea of mark-making as a ‘language’. I was looking at the Impressionists a lot, and at Monet in particular. The language of paint that I was developing and excited by seemed to work well when I was in front of something fluid.

“I always come back to water as a subject matter, but I also come back to tone. I’m a tonal painter, not a colourist. I’ve always worked from light to dark.

“I think figure has become more important. Painting a figure in a landscape has become a bit of a speciality for me.”

Richard Coulson is a painter and draftsman. He’s honorary treasurer of the London Sketch Club, a member of the company at Heatherley’s School of Art, and founder of the Cheyne Drawing Studio, which runs weekly life-drawing classes. His work is being exhibited at Aubergine Art in Wimbledon this month. He lives in Shepherd’s Bush.

“Chelsea’s always interested me. One of my tutors at Goldsmiths used to have a studio in Tite Street, and my connections with that street go back a long way. If I go to Chelsea, I feel at home there.

“I love London, and have always responded to it. I have painted a lot on the river, on Battersea Bridge and all around there. I love that area, particularly with the different sorts of light that you get on the river. I like the fog. Sometimes when it’s very foggy I get up and paint out there because I love the sun coming through the mist onto the river.

“I’m basically a draftsman. I’m convinced I’m one of the better draftsmen in the UK at the moment. That’s why my teaching has been so successful. I was taught by a good draftsman, and I’ve kept those skills going and developed them – I haven’t stayed still.

“I’ve been a member of London Sketch Club since 2007, and I run a class every Tuesday, which I’ve done since 2011. I knew it wanted to start a facility for life drawing, and there would be a call for it from people who don’t necessarily want to be taught. There are teachers who feel they’ve got to make their mark on people who come to them. I’m not like that. I suppose from that point of view my ego is smaller than other artists. I’m not one of these people that want to turn the world into clones of Richard Coulson, which I’m sure the world is glad about.”

Alice Boggis-Rolfe graduated in portraiture from Heatherley’s in 2012, and works predominantly painting landscapes. This year, as well as joining the Chelsea Arts Society, she was awarded the Wedlake Bell Prize for Young Artists in June.

“I studied at Heatherley’s, and I work in Green & Stone, which is the oldest shop on the King’s Road. I could almost paint full time now, but it’s nice having some structure. I think working part-time means that you always look forward to painting, which I think is important. Everybody who works there is a painter, which is nice. And everyone does slightly different things, so we can all share our ideas.

“Luke (Martineau) kindly made me a member of Chelsea Arts Society this year, so this is my first year exhibiting with them. Fundamentally, being a painter is one of the most lonely jobs in the world. Having other people that you can talk to and share ideas with and exhibit with is amazing, especially when they’re other painters. Because as different as everyone’s work seems, we’ve all got the same idea, so it’s nice to share ideas and be inspired by each other.

“Winning the Wedlake Bell Prize was great. It opened up new sales and commissions, which was nice. Lots of the people I’ve sold to in the past year have found me through Instagram. In the old days you’d have to wait for a gallery to find you, pick you up and then still take 50 or 60 per cent per painting. That was the only way people could find you. Whereas now, I do all my own marketing and I have my own website. I have a regular Instagram feed and am on Facebook – I’ve developed my own mailing list through that.

“It’s useful not only for selling things and getting your name out there but also for seeing what other artists are up to. It puts the power into the artists’ hands. Until recently, music was the cool genre that everybody can listen to all the time, whereas things such as Instagram have now made art accessible to everybody. So if you follow a couple of artists, you can wake up in the morning and flick through your feed and see a couple of paintings to brighten up your day.”

Jonathan Hills’ career has taken him from the traditions of fine art painting to the cutting edge of illustration technology in CGI for films. He now specialises in figurative and landscape paintings for commission. He is a member of both London Sketch Club and the Chelsea Arts Club. He lives in Rye, East Sussex.

“The great thing for artists is the Chelsea Arts Club, because it allows a host of artists to have a base in Chelsea. It’s a place where artists can share encouragement.

“I believe in drawing. It’s something that has become a little bit out of fashion. I love drawing more than anything else. That’s why the London Sketch Club is important, because we not only draw for ourselves but also have open drawing sessions.

I’m encouraging people to look around and see there are unexpectedly beautiful things in the world that will give them just as much pleasure as a painting. Because we’re moving into a world where people don’t buy paintings so much any more.” 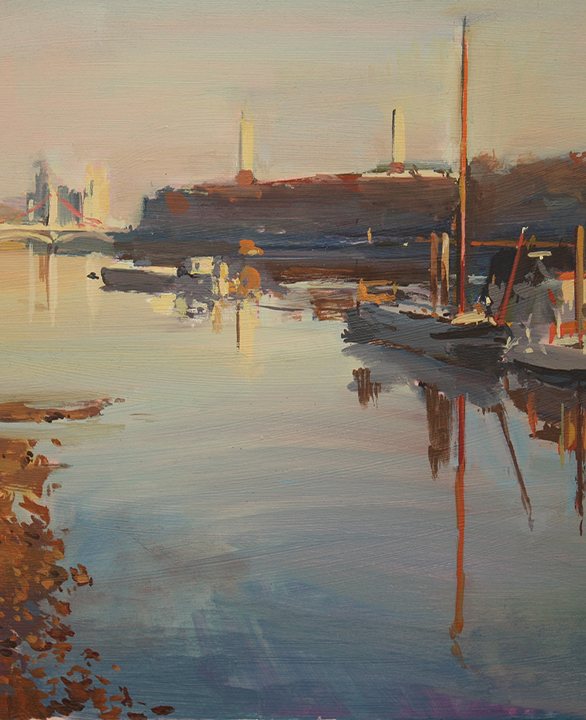