An urban garden with a graffiti wall might not be the first thing to spring to mind when imagining this year’s Royal Horticultural Society (RHS) Chelsea Flower Show, but the Greening Grey Britain Garden is here to change our perceptions.

Designed by show regular Professor Nigel Dunnett, who is also the brains behind the Olympic Park garden, the garden will showcase how and why plants, nature and gardens have never been more needed in our towns and cities.

“Gardens and plants are no longer an optional and decorative ‘nice-to-have’; they’re essential. With pollution levels dangerously high in cities like London, Glasgow and Southampton and flash-flooding devastating areas of the country last year, we need to all embrace the fact that plants help mitigate against some of the biggest environmental threats facing us today,” says Nigel.

Set within an urban context of high-rise and apartment blocks, the RHS Greening Grey Britain garden focuses on practical and creative solutions for where space is at a premium, including balconies, and other spaces on and around the buildings themselves.

“The benefits of plants, gardens and greenspaces aren’t appreciated enough,” Nigel adds, “and I hope that by showcasing realistic, simple and sustainable ideas that are directly relevant to home gardeners, community groups and, crucially, to urban residential and commercial developers, we can make a difference.”

Nigel uses plants that soak up pollution, as well as those that are drought-tolerant. The garden uses water-sensitive design ideas, such as rain gardens and wetland areas to deal with flash flooding. Nigel’s typical “low-input, high impact” planting style is used throughout to deliver a long-lasting colourful visual display with minimal maintenance and high wildlife value. The garden is full of ecological ideas set within a modern and contemporary design.

Large, multi-tiered habitat structures, which mirror the human apartment block, also feature in the garden. These “Creature Towers” provide a home for a wide range of wildlife, such as insects and birds.

Other elements include bike storage, recycling and composting facilities, and edible planting, including a 2.5-metre-long communal meeting table, which integrates fruit trees and herbs in its structure.

“We know that gardens and gardening bring people together, and there’s now overwhelming evidence that they make us feel better and healthier. These ideas are central to the design. In uncertain times such as those in which we live now, where community spirit is deteriorating and we are unsure of what lies ahead, there’s never been a greater need for us to engage with each other, and with nature,” adds Nigel.

Nigel hopes that this, as well as the urban nature of the garden, will attract a younger crowd to the show.

“I think typically the show has been thought of as something for an older generation, but we’d love to engage younger people with the street art and the fact that the garden shows you don’t need a huge space to create something special,” he says.

The RHS Chelsea Flower Show is at the Royal Hospital, May 23–27. Tickets are available at rhs.org.uk/flowershows 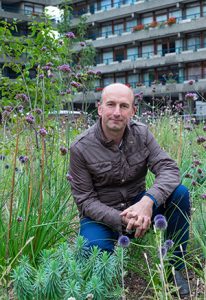