The Birley’s are arguably one of Mayfair’s most famous families. We all know Berkeley Square’s luxurious Annabel’s, the club launched in 1963 by the late Mark Birley and favoured by everyone from Lord Lucan to Lady Gaga. The club was named after his then-wife, former Lady Annabel Vane-Tempest-Stewart (she later married James Goldsmith with whom she had three children – Jemima, Zac and Ben). Mark’s son Robin Birley has taken on the role of the West End member’s club doyen. Described by the FT as a ‘gentle giant at the heart of Mayfair’s social scene for the past 30 years’, Robin began with Birley’s sandwich bars in the City in 1986, taking over his father’s clubs – Mark’s, Annabel’s and Harry’s Bar – in 1999 before they were sold to Richard Caring for a reported £90 million in 2007. Now he’s the founder of the successful 5 Hertford Street, among other ventures including a new wine club named after his grandfather, somewhat forgotten painter Oswald Birley.

Sir Oswald was the go-to portrait artist of the 1920s-40s, commissioned to paint royals, aristocrats, politicians and leading movers and shakers of his time. Robin, along with renowned dealer Philip Mould, are set to give Oswald the recognition he deserves, with both a namesake club and an exhibition.

The team at Mould’s Pall Mall gallery, including a dedicated art historian for the show, have sleuthed paintings from the walls of country houses, museums and palaces, many of which have never left their homes since the day they were painted.

“He was the portrait painter of the ruling classes of Britain, to use a quotation from the period, between the wars, but also had military prowess,” explains Philip.

Born in New Zealand in 1880, while his parents were on a world tour, Oswald served in France in the World War I first with the Royal Fusiliers, later transferring to the Intelligence Corps obtaining the rank of Captain and being awarded the Military Cross in 1919. During World War II he served with the rank of Major in the British Home Guard. A favourite of the Royal Family, he was well-known for his portraits of King George V, Queen Mary, King George VI, Queen Elizabeth, The Queen Mother and the present monarch Queen Elizabeth II. He painted Winston Churchill many times and became his friend. Birley was knighted in 1949.

“He was a man of tremendous integrity,” Philip adds. “Churchill talked about the masculine bluntness of his realism. So it was a combination of realism and attention to detail and the quality of the sitter, combined with accuracy and honesty. A society portrait painter’s job is partly to capture a likeness, but that’s only the first part. The subject which needs to impose their own personality of course, not least because they’re paying, and then there is the artist’s vernacular, or world view, or way of understanding and responding to humanity, which is often the reason why the subject is brought in to that particular artist’s way of doing things, and it’s that last bit which is so significant in the form of Birley, because he was utterly in tune with a certain type of Englishness, sensitivity, in some ways a sort of feudalism, but also he understood, partly through his war experience, the vulnerability of the human condition as well.”

One critic said the clothes of his subjects were always ‘beautifully well tailored.’

“What’s really interesting it that when he is not painting to order, or he’s painting bohemians or people he knows very well, writers, ballerinas, members of his own family, he can then let his guard down even more,” explains Mould.

The exhibition will include 40-50 works, from “hierarchical civic splendor,” as Mould describes it, to the more personal such as Mark Birley as a child and a painting visitors to 5 Hertford Street will know well – a portrait of Oswald’s wide Rhoda, which welcomes guests to the club cloakroom.

Oswald married Rhoda Lecky Pike in 1921 at the age of 41. The Irish beauty, 20 years his junior, wears Venice carnival attire in the painting, with an alabaster face and demurely lowered eyelashes.

Mould is keen to convey that Oswald’s success was not only down to his creative talent, but also his personable nature.

“Yes, like Lucien [Freud]. He very good with sitters, very amusing, very good company. Wicked though he was. Unlike my grandfather, Lucien was always intent on seducing people,” Robin agrees, laughing.

Robin was born six years after his grandfather’s death in 1952 so the pair never met.

“My entire life, my father only mentioned my grandfather once. He said they were sitting at lunch and my grandfather liked dogs and there were some milling around and my grandmother said ‘look it’s going to be either me or the dogs I can’t take this anymore’ and my father remembers intercepting a look from his father who said, ‘not a difficult job,’” Robin smiles, admitting, “they had a difficult marriage.”

Robin grew up around the paintings at his father’s house, and often visited his grandmother at Charleston Manor House in Sussex (where the couple established a music festival and Rhoda designed the garden, remaining there until her death in 1981.)

“She had quite a few Churchill’s too, which sadly got sold,” Robin laments. “I dimly remember his studio in St John’s Wood. He was incredibly prolific, ploughed through pieces, which is one of the reasons the prices aren’t very high.”

“I buy a lot,” says Robin. “I bought a few bad ones, but I’ve bought and have inherited some good ones. I’m always on the look out for them. They don’t come up that often because they don’t go for very much and if it’s your aunt on the wall, what’s the point of selling it, you’re only going to get a small amount for it. I normally buy two or three a year. I bought one of a huntmaster about a month ago for £6,000 which I think it very nice indeed.”

Robin and Philip came up with the idea of an exhibition around 18 months ago over lunch.

“It’s a family pride thing,” says Robin. “He gave a small exhibition in 1952, I think it’s a nice thing to do, secondly I think if it’s put in its context of who he was painting it adds a great interest to the whole thing, and that style of painter is completely and utterly neglected. I mean they’re just so unfashionable and yet I love looking at those paintings. You know how it’s a flood, everyone follows the leader, so the flood is contemporary, so no one looks at these paintings and yet they are wonderful. It is recognition for him in today’s age and I think it can be something more than that.”

The creative gene was passed down in various guises. Robin’s sister is artist India Jane Birley.

“My father was actually quite a good draftsman,” Robin reveals, “but he basically directed his creative talent through his clubs, and I guess to some extent the same is true of me. Essentially I live and breath pictures, that is what I love most. I constantly buying and improving. I am going to buy more and more and more. I don’t collect for value, I buy purely for the art. I put them in the clubs so I try not to look at the artist, although sometimes I can’t help myself. I don’t consider myself a collector. I am an embellisher of my clubs.”

“It’s all about wine, on three floors. On the ground floor I am paneling it with all these mirrors, to give it a sort of glamour. I don’t think anyone has done it on this scale in the last 30-40 years. All the house wine will have a picture by my grandfather on the label.”

Philip adds: “Is he [Oswald] an avant guarde artist, a radical modernist? No. But what he was doing is something that the British have done very well, he has captured a type of self representation of power and beauty, which has integrity and is tempered with his own understated good taste. Which has passed down thankfully.” 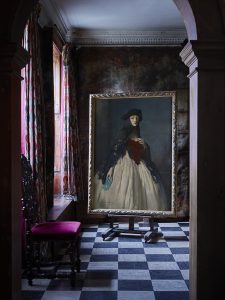