She raised hell at St Trinian’s and met a sticky end as a Bond girl, but it’s Made in Dagenham, opening at The Adelphi, that has actress Gemma Arterton quaking in her boots, finds Matthew Hemley

When Gemma Arterton walks past the Adelphi Theatre on The Strand, she’s hit with about of nerves.

In just over three months’ time, it’s where the actress will be performing in a musical version of the Made in Dagenham film.

Andwhile Arterton is no stranger to theatre work – having most recently starred inThe Duchess of Malfi at Shakespeare’s Globe – Made in Dagenham will mark her musical theatre debut.

Appearing in an all-singing, all-dancing production, she admits, is a terrifying prospect.

“I will be absolutely petrified on opening night,” she says. ‘The Adelphi is something like 2,000 seats – or whatever it is… “She stops herself, and shudders: “I actually don’t want to know.”

Arterton first became aware of the musical when she was working on the film Byzantium. Its producer, Stephen Woolley, had heard Arterton singing, and handed her a CD of proposed songs for the musical version of Made in Dagenham, the film of which he’d also produced.

Arterton took it away and was immediately hooked.

“I was sitting in my bath, listening to the ballad Rita, my character, sings, and I got goosebumps,” she recalls. “It’s so well written. So I said to Stephen I would do the workshop for the musical. But I was really nervous, as it’s a huge deal to agree to do a musical and I wasn’t a musical theatre actress.”

She adds: “I ended up doing three workshops and after the first one I got over my fears and really wanted to do it more than anything – because of its story and its message.”

Made in Dagenham is written by Richard Bean, of One Man, Two Guvnors fame, with lyrics by Jerry Springer the Opera‘s Richard Thomas and music by David Arnold, known for his many filmscores, including several from the Bond franchise.

It tells the true story of the 1968 strike by a group of women working as sewing machinists at Ford’s Dagenham factory, who were fighting to secure equal pay.

“I love that these girls were factory girls who changed politics,” Arterton says. “That is something that moves me a lot. It shows that anyone can do anything, really.”

The fact it is based on real events helps set it apart from other musicals too, Arterton says.

Sometimes, she suggests,musical theatre is so “grand and fabulous it’s not real”.”But this show is different because it’s rooted in reality,” she continues. “It has those moments where we break out – at one point the cast take on a Shirley Bassey-style number. But at the same time it has grit and reality.”

Though opening an original new musical is hugely exciting for everyone involved, Arterton is aware of the risk involved.

The West End can be brutal, and many recent high-profile shows have failed to capture audiences’imaginations, such as I Can’t Sing!, the X Factor musical, which closed earlyafter just two months.

Arterton admits the tough environment concerns her, claiming that it’s too expensive for producers to keep productions running if they’re not pulling in the audiences.

“But all we can do is make sure our show is special,” she adds. “And I think it is. Otherwise I would not have said yes.”

Made in Dagenham begins its run at the Adelphi Theatre on October 9. 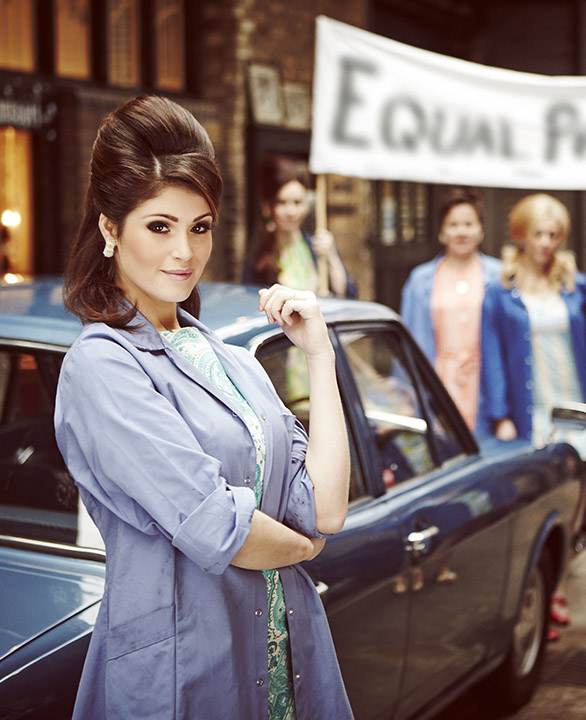