Drusilla Beyfus is a journalist, author, broadcaster and tutor. A well-known commentator on modern manners, she has just written a book on the life of Givenchy. She talks to Lorna Davies about what she has in common with the French design icon, as well as her love of Belgravia.

Drusilla Beyfus might be one of the longest-serving residents of Eaton Square, having moved to her first home there in the 1950s. Her future husband, the late Milton Shulman, a prominent Evening Standard theatre critic, had just left Canadian intelligence and was looking for somewhere to live. “We were both working for Lord Beaverbrook (who owned the Daily Express and Evening Standard) so got to know each other. He said he was looking for a flat,” says Beyfus. “I’d heard Eaton Square was being renovated and I suggested there.”
Built in 1827, Eaton Square was damaged in 1941 during World War Two when bombs hit St Peter’s Church and killed its vicar, Austin Thompson. While other squares in London were mainly occupied by commercial and institutional bodies after the war ended four years later, Eaton Square remained almost wholly residential (there are still bomb shelters under the central gardens) and became one of the capital’s most fashionable addresses, which it remains today.
“Milton moved to a flat overlooking the square and was thrilled with it. Then we got married, I had a baby and we lived and worked there very happily. We needed somewhere bigger when I had my second daughter but the idea of moving away was just heartbreaking. Luckily we found this place and have been here since,” Beyfus explains from her living room overlooking the leafy square.
Beyfus’s home, which she has lived in since 1960, has stunning views of her beloved trees on both sides and is filled with memorabilia, pictures and literature – some of which is written by herself or a member of her media-savvy family. “My husband said we’re an epidemic because there are so many of us [in the media],” says Beyfus, whose writing career started in the 1940s, while Canadian-born Milton, who died in 2004, was on the Evening Standard’s payroll for five decades.

Probably their most well-known child is Alexandra Shulman, the editor of British Vogue (interviewed in August’s Belgravia), currently working on her second novel. Alexandra’s sister, Nicola (the Marchioness of Normanby after marrying Constantine Phipps, the fifth Marquess, in 1990), has also written several books, and the youngest, Jason Shulman, is an artist and former Harpers & Queen, Harvey Nichols’ magazine and The Sunday Telegraph magazine art director. He is married to writer Susan Irvine, whose new book Vogue on Cristóbal Balenciaga has just been published.

“I was very pleased that my daughters wanted to write. We’ve got a shelf of all our books here, and I’ve got another one to add now,” Beyfus says, referring to her latest book, Vogue on Hubert de Givenchy.

Published in October, it forms part of the second Vogue on series, focusing on the world’s most renowned designers. Born in 1927, Givenchy is the same age as Beyfus, one of the reasons Vogue – whom Beyfus regularly writes for – felt the pair were well matched. She was also in Paris working for the Daily Express when Givenchy launched in the city. “It was a voyage of discovery,” says Beyfus. “It’s always fascinating discovering your own generation.”
Back then, Paris was beginning to enjoy itself again after the ravages of war, a time that Beyfus describes as “incredibly exciting”. “I grew up during World War Two so being in Paris in the early 1950s was untold luxury. There was a tremendous sense that beautiful clothes and wonderful food really mattered; they were part of the city. I was completely seduced by it. I remember having my first omelette in Paris and I suddenly realised, having been brought up on boring school food, that there was something more!”
Givenchy’s name is intrinsically linked to that of Audrey Hepburn, with whom he enjoyed a lifelong friendship. He met his iconic muse in 1953, when a twist of fate meant she visited the new young designer after Cristóbal Balenciaga turned her down. “For the film Sabrina [where Hepburn plays the daughter of a chauffeur who is sent away to culinary school in Paris] she wanted to wear original couture. Balenciaga was the king of Paris couture but was too busy to see her. She had heard of Givenchy because he was the buzzy, young name, which I think tells one something about her, and so was determined to go and have a look for herself. Givenchy agreed to see her, and that was the beginning,” Beyfus explains.
Beyfus had a “wonderful excuse” to revisit many of Hepburn’s films, such as Breakfast at Tiffany’s and Funny Face, as Givenchy designed most of her costumes. “He knew how to show off the proportions of her body. In every way she responded to his design philosophy. I think they had a shared aesthetic – that’s what drove the relationship – but there was real fondness there,” she adds.
Givenchy sold the business to LVMH Moët Hennessy – Louis Vuitton in 1988 and retired in 1995, but it was his unique blend of creative talent and entrepreneurship that interested Beyfus. “Creative spirits often have a business manager: Yves Saint Laurent had Pierre Bergé, while Valentino has Giancarlo Giammetti. What was interesting about Givenchy is that he was both chief executive and designer. There aren’t many people who combine an acute business sense with serious creativity,” she says.
The book took about a year to write, mostly in Beyfus’s office at home, which is full to the brim with books, including lots of Vogue titles. She says the area is a great place to work because of the transport links. An art lover and theatre-goer (Beyfus has just seen Lucy Kirkwood’s Chimerica, which she highly recommends), she also appreciates the abundance of choice in Belgravia.
Beyfus was born in London but her first job was as a reporter for the Reading Mercury and Berkshire Chronicle when her mother lived in Henley-on-Thames. “I was jolly lucky to get a job. I was 17 years old,” she exclaims. But it didn’t take long for the bright lights of the capital to pull her back. “I used to meet my friends on the steps of the Royal Court. I think it was the extraordinary denseness of experience that you get in London that attracted me,” she says.
The Shulman children have all stayed in London, with daughter Nicola on Chelsea’s Tite Street. “Oliveto [Elizabeth Street] does really good pizza. I go there often with my daughter and grandchildren,” Beyfus says. She also rates local favorites The Thomas Cubitt on Elizabeth Street and Sloane Square’s Colbert.

Being in the area for more than five decades has meant Beyfus has seen people come and go, but it seems Eaton Square has become part of the family. “I love the elegance and beauty of the architecture and the environment,” she says. “I never walk into Eaton Square without thinking what a beautiful place to live.” 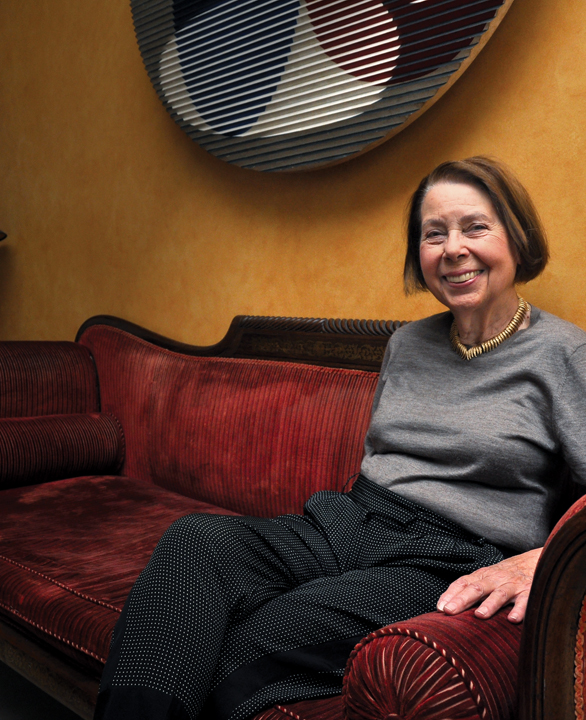