Since opening his first restaurant in 2010, Jason Atherton has built a foodie empire stretching from Soho to Shanghai. He spills the beans on his new Victoria venture. By Corrie Bond-French.

I laugh when Jason Atherton apologises for being late. He’s been caught up in a couple of demonstrations, and when he quips, “If Maggie Thatcher was here she’d sort it all out”, it didn’t occur to me that he was genuinely such a fan.

But as I discover, there are a lot of things about Jason, the most indefatigable of chef restaurateurs, that defy preconceptions and on reflection, seem glaringly obvious.
We meet at Social Eating House in Soho with head chef Paul Hood, chatting, among other things, about the upcoming opening of their new Italian restaurant in Victoria’s Nova development.

Jason’s global restaurant empire has grown exponentially in the last six years. He opened his first independent venture, Table No 1, in Shanghai in 2010 and now has 18 restaurants across the world, with more in the pipeline. His unique business model is to invest in his protégés, helping them run new restaurants, keeping things close knit. Clearly, it works, and it is, interestingly, these “family” ties that enthuse Jason the most.
Jason has worked for Marco Pierre White, Pierre Koffmann and Nico Ladenis and was a protégé of Gordon Ramsay, becoming executive chef at Maze before there was a parting of company over some monetary matters.

Maze was the foundation of Jason’s ventures. He employed Paul there, along with several of their colleagues who now play their own parts in the Atherton empire.
With restaurants in Hong Kong, New York, Australia and Dubai, as well as his London Social oeuvre, with a nod to latitude and longitude it can safely be said that there is someone eating Jason’s food somewhere in the world at any given time. Clearly, it has been a belter of a decade.

Paul nods in agreement, then Jason gets distracted by the jug of water. “That’s awful, where are the silver antique ones? You’ve got to change them, it looks like a staff canteen.”

Clearly, nothing escapes Jason’s beady eye for detail, and this quest for perfection in his vision of hospitality has underpinned every stage of the growth of the business. There are no nooks and crannies to hide in.

But while he may be exacting, Jason eschews the old-style of discipline that has existed in kitchens for aeons. Not for him the hairdryer in the face effect employed by gobbier head chefs. Jason would rather keep calm under pressure, then talk about any issues later.

“With the shouting, it just becomes normal, and it doesn’t lead on to anything positive. When Marco, say, would shout at me I’d just carry on, and it becomes like water off a duck’s back. I want [my staff] to care and to understand that it’s a team effort.”

Paul and Jason both share this holistic approach to hospitality. They want their restaurants to be comfortable, offer good food and to be value for money for every customer.

The new Italian in the pipeline at Nova (the name, at the time of print, is yet to be confirmed) will offer a mid-priced menu with pizza ovens, fresh pasta making, plus a deli on the side and a speakeasy-style bar.

Both Paul and Jason are passionate about Italian food, and their faces light up as they talk about it.

“I want it to be affordable, and to be like a neighbourhood restaurant, casual and easy going,” Jason says.

“There’s no dress code really – and we’ve talked about it – except [for no] flip flops and shorts. I was shocked by how casual things were in LA at first, you know, everyone at Nobu still wearing their baseball caps back to front. Then I was in a lift with Keanu Reeves and he was really casual too, but what’s the norm over there is a bit different.”

Both Paul and Jason have a similar story to tell about their paths into kitchens. Paul had little inspiration at home, but fell for cooking in his late teens when he studied hospitality at college.

Meanwhile Jason tried his hand at cooking in the army catering corps at 16 after he was inspired by an army catering van serving omelettes on Skegness seafront.

But it wasn’t to be – he lasted all of six weeks. “I hated it, I was too young to know what I wanted to do. Who does know what they want to do at 16? But I knew it wasn’t that.”

Eventually, he spent a “lonely year” in a kitchen in Alsace, but he was hooked.

Business family is one thing, but family is paramount too. Jason’s wife Irha helps to run the business, and restaurants are closed on Sundays. With two daughters each, both Jason and Paul want to make sure that a work/life balance can be struck positively in a business that is known for relationship-damaging, ferociously long hours.

But Jason has no intention of stopping or even contemplating that it’s time to slow down.

“What you can’t do is take your eye off it, get complacent,” he says. “London is littered with great chefs who have done that. You’ve got to keep up, maintain it, but ultimately I still love what I do.”

It’s interesting, given that his mantelpiece would groan under the weight of his awards (although I suspect they’re probably used as doorstops) that Jason is in two minds about Michelin stars.

“Chefs need them, but I don’t think the public need them, they don’t need a Michelin star to enjoy a good meal,” he says. “I don’t ever think about the Michelin stars, it’s not about that.

Given his business reputation, Jason has a relatively low-key profile as a celebrity chef. He tells me he just wants to keep doing what he does best.

“The whole celebrity chef culture, and TV – I don’t want to do that,” he says. “I’ve done Saturday Kitchen a couple of times, and I did the Great British Menu – never again. Then I did My Kitchen Rules and it was just, well, you end up travelling everywhere, then staying in crap hotels, and for what? I’ll just stick to what I know.”

But he does have some other exciting ideas in the pipeline. There’s a long-term plan to set up a farm to grow produce on, and he tells me there will definitely be more restaurants cropping up. It’s all feasible because of his supportive business model and the fact that he isn’t distracted by the celebrity side of things.

I think of the admiration he voiceV03-d for the Iron Lady at the beginning of our interview. What, I wonder, makes Jason Atherton tick? Positivity, tick. Work ethic, tick. Passion for his metier, tick. Business acumen, tick. But actually, it’s mostly about sharing the love, but on a huge scale. And we all know what they say about the way to a heart being through the stomach. 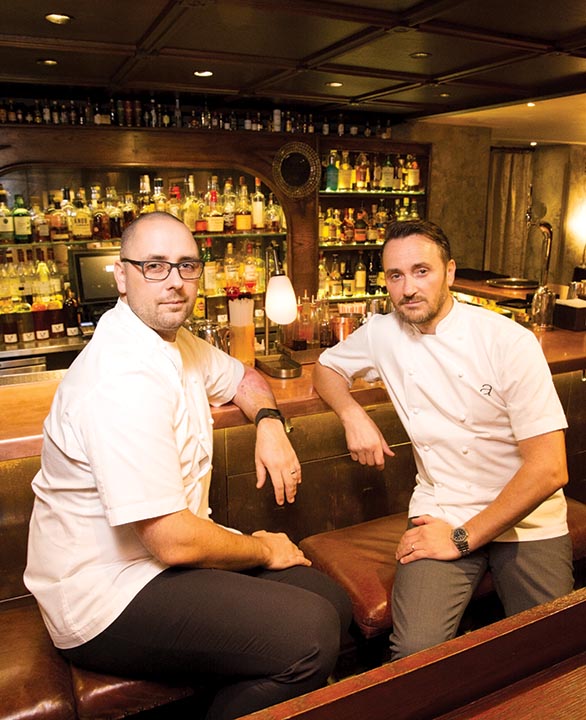