Kate White explores why it’s not just the grass that is greener in Victoria, as living walls breathe new life into the area while stopping the sewers overflowing and improving our mood.

For Teresa Zagni, landlady of the Bag O’ Nails pub at 6 Buckingham Palace Road, the enormous living wall on the side of the Rubens hotel offers a welcome flash of greenery from her windows.

The Bag O’ Nails is located directly opposite Nova – Land Securities’ 5.5 acre scheme of shops, offices and flats. Phase one is set to complete in 2016 but, for now, it’s one of central London’s biggest and noisiest building sites.

“It is nice when you come out of the pub and you look up and see all that greenery,” says Teresa. “I notice a lot of people pointing up and taking photos of it as well. It’s something different and it has become a bit of a tourist attraction.”

The living wall is home to about 10,000 plants, with species ranging from snowdrops and strawberries to primroses and periwinkles. Spanning 450 square metres and holding 16 tons of soil, it is the largest of its kind in London.

The idea for the wall came about four years ago, when the Victoria BID mapped the business improvement district to assess which areas could do with some more greenery. One space it identified was the large blank wall on the side of the Rubens hotel – opposite the Bag O’ Nails.

Gary Grant from Green Roof Consultancy was chosen to design the living wall. He has masterminded green schemes ranging from London’s first vertical rain garden in Southwark to the living wall at Westfield shopping centre in Shepherd’s Bush.

“I have been involved in a number of large projects, but there aren’t very many on the scale of the Rubens hotel,” admits the ecology expert. “This is the largest one I’ve ever designed, and one of the most spectacular.”

The wall, which has been funded and maintained by the Rubens, is made from a series of plant boxes attached to a large wooden frame. Since it was installed by Armando Raish from Treebox, it has attracted bees, other insects and even several birds’ nests.

Thanks to the ingenious watering system, the project also received a grant from the Greater London Authority’s Drain London fund, which seeks to alleviate the threat of flooding in the capital.

Plants are partly watered from three tanks, which collect rainwater and pump it round the wall. Between January and March this year, rain accounted for 45 per cent of the total water used to irrigate the plants, with the rest coming from the mains.

“We’re helping to reduce the risk of flooding in Victoria, because a lot of the rain that comes off the roof is going into those tanks instead of hitting the wall and overwhelming the drains,” explains Gary.

“The wall has lots of other benefits too. It keeps the hotel rooms cooler in the summer, and warmer in the winter – it’s like the building is wearing a coat. It also reduces air pollution and provides a habitat for the birds and the bees.”

The Victoria BID is planning to conduct a biodiversity study of the wall in spring next year to identify what kinds of wildlife are living in it, says David Beamont, the BID’s operations manager.

In addition to the environmental and business benefits – “there are lots of studies to say that green space lifts our mood and reduces stress”, says David – another aspect of the wall that he enjoys is the way it evolves throughout the year.

“Over time the plants will continue to fill out and you’ll see some fantastic texture,” he explains. “It won’t be uniform – some plants will grow more than others. There will be an undulating, rippling effect across the wall.”

Malcolm Hendry, general manager at the Rubens hotel, says the wall has proven popular with everyone from guests to passers-by. “I actually get phone calls from random people who ring up just to say what a great-looking wall it is,” he chuckles. 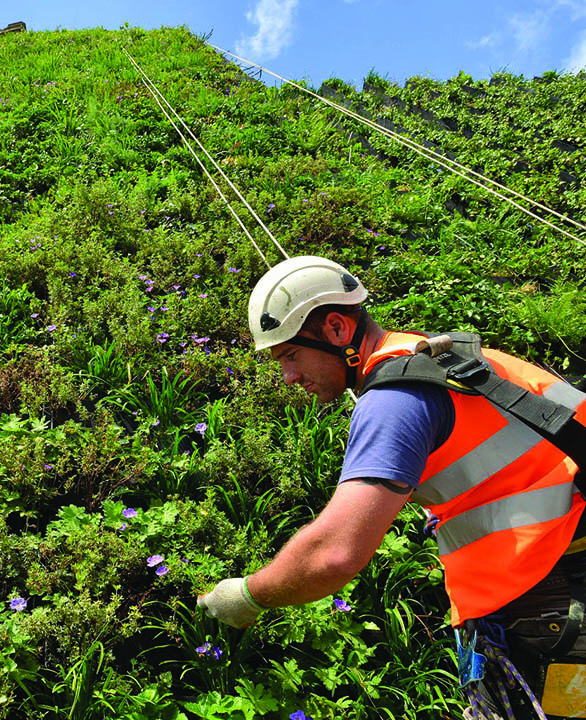