Corin Mellor has been a frequent visitor to Sloane Square since he was a young boy. “I remember Chelsea from the days gone by when the punk rockers would congregate in Sloane Square – as a child it was quite exciting.”

Now grown-up and having inherited the role of creative director from his father and the design store’s found David Mellor, Corin has lived through huge change in not just the shop, but the whole area.

“The store opened in 1969 at the height of the Swinging Sixties. It was called David Mellor Ironmonger and because my father was from Sheffield he brought down a whole load of screws, nails and doorknobs. The upstairs was half ironmonger and half special silver pieces, plus a bit of homemade jam. It was absolutely crackers but good fun.”

These days David Mellor is best known for its iconic cutlery sets and knives, which are made at the factory in Derbyshire. “We are very lucky that we have an amazing site and the building is famous in it’s own right, as it was designed by Michael Hopkins and partners. It was actually purpose-built as a cutlery factory in the Peak District, which in itself is a little unusual.”

Mellor says Pride, one of his father’s designs and still the company’s bestseller, is his favourite of the famous ranges. “Interestingly I had to defend it yesterday when a gentleman came in with his wife, wanting to buy some cutlery for their daughter’s wedding. He picked up Pride and said, ‘Eugh it’s terribly light.’ I had to explain that to make it light and beautifully balanced is actually a good thing. It’s almost like eating with jewellery.”

Pride represents the epitome of good design in Mellor’s eyes because it was a radical design in its day, yet is still modern and in-demand now. “That is was I strive for when I’m designing anything. I hate fashion and trends that are designed just for the moment.”

One range that was created purely by Mellor junior is the Chelsea cutlery set, the other sets bearing his name being collaborations with other designers. He describes it as having “both classical and modern elements, with a sort of visual purity. The front side is relatively flat but when you pick it up it has a tactile quality. I put quite alot of metal in the middle so it balances in the hand.”

Functionality is an important consideration at David Mellor, which is why Corin is keen that the brand’s lines are not discontinued. “I feel quite strongly about that. It’s so annoying if you break a glass and can’t replace it.”

Appropriately we are sitting outdoors at April’s Café on Pavilion Road, and admiring the place setting which Corin identifies as being “at least two thirds David Mellor” with Odeon cutlery and Scandinavian blonde plates.

He is down in Chelsea about two or three days every fortnight. “What I particularly like about the area is the incredible architecture and the people – there is a real mix of different characters and we get absolutely all sorts in the shop.” Some are rich and famous but “a lot are loyal local customers who’ve been coming to Sloane Square for an awfully long time.”

His eldest son is now 12 years old, and Mellor suspects he may be showing interest in the family business. “They both [Mellor has two sons] have their own toolkits and are in the workshop, and they do make and design things, but it’s up to them to find their direction” he muses.

Mellor says it was never a formal ambition of his own to work for the family firm, just a natural progression having frequently been in the workshop as a child. “I trained in furniture and product design at Kingston Poly and then worked for an architect in Farrigndon. I got bored because I couldn’t make anything, so came into the company working on what is now the Conran headquarters.”

He loves building and making things on all sorts of scales – “I do silver commissions but I also do bridges.” He also professes to enjoy not only seeing the finished product but also meeting the person who is buying it, and having a chat with them. However cautions that “you can only really do that on a small scale, which is why we are still quite small.”

The diminutive size means just 12 people working in the factory, where everything is done by hand. “About 35 hand operations go into just one teaspoon. When we take people around the factory they are amazed at just how much work goes into an ordinary object.”

Time-wise from an initial idea, for cutlery it can be up to a year and a half before the product will arrive in store, but for a new range of glassware it could be as quick as six months. The company tends to launch “around four new ranges in a typical year” but they could vary from china, to glass to metalware.

The firm also does private commissions. “For instance at the moment we are doing something for Sheffield cathedral and last month we did a special silver bowl for someone. I quite like doing the specials, even though they can be a bit of a fiddle. But just doing one, means there is a different remit in terms of what you can design compared to if you had to do 100.” The scale may still be small, but the quality is very much high. 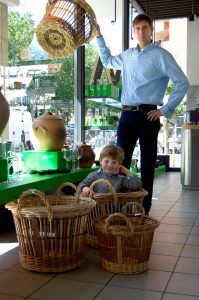