Kate White looks at the valuable work of the Cardinal Hume Centre, Grosvenor’s charity of the year that supports struggling families and individuals, as well as accommodating homeless young people

Last year, Amy, 29, ran away from her abusive husband. After a few weeks on the streets, she managed to find a bed in a refuge.

For the first few months she barely left her room. But eventually she got talking to another resident in the refuge, who told her about the Cardinal Hume Centre and offered to take her there.

Amy’s husband had never allowed her to work. She had no confidence and no work experience, but she was desperate to build a life for herself. One of the centre’s employment advisors found out that her dream was to work in a bank.

He arranged for Amy to go on an open day at an investment bank, where she had the chance to meet people from within the company. Wearing her first ever suit, she had the confidence to talk to staff members, and she left the day feeling determined.

The advisor then contacted the bank and arranged for a member of staff to mentor Amy. Her mentor told her about an upcoming internship opportunity and, after a lot of coaching, she won a place on the scheme.

Amy, who is now filled with hope for the future, says: “The centre has given me my life back. I feel I have been given the chance of a new life, and I am going to take every opportunity that comes my way.”

Amy is one of thousands of people who have walked into the Cardinal Hume Centre since it opened in 1987. The charity, which is based in south Westminster, offers homeless people aged from 16 to 21 support and accommodation in its 32-bed hostel.

The centre also helps thousands of local families and individuals to escape poverty and homelessness, by giving advice on employment, money management and housing; providing advocacy; and offering English classes, IT training and work experience.

There is a medical centre on-site, parenting classes and a homework club for children. “We open our doors for anyone in the local community who needs us,” says the charity’s chief executive, Cathy Corcoran.

Young people can become homeless for a variety of reasons, she says, including overcrowding in the family home; physical, emotional and sexual abuse; breakdowns in relationships; or their parents’ second marriages.

“In the home, there is often very little space for children to do their homework or to play. We provide an outside space where they can play and develop through play, which is an important part of childhood.”

The centre also offers an early-learning programme to help two- and three-year-olds. “It gives them the chance to have the good educational foundation that they might not have while their parents seek employment or go to work,” says Corcoran.

The charity has seen a huge rise in people needing its help in recent years, she says. “More and more people aren’t making ends meet anymore – they’ve kind of gone over the edge of the cliff.

“Many people are subject to the cap on housing benefit, so they’re having to pay the gap between what they have as an income and what the rent is. Rents are going up, and the cost of living has risen in terms of heating and food and clothes.”

As a result of the cuts, there is now just one citizens’ advice bureau in the whole of Westminster, adds Corcoran. “There’s a real poverty of information out there, so one of our growth areas is information.

“Come to us and we’ll give you the clearest information we can about your rights, what you can do and what you’re entitled to, because there are few places where people can go anymore.”

Often people aren’t aware of their rights, she says. “People get frightened. Their English might not be brilliant, and they may not be literate. There’s a host of things that freeze people into a system, and we help them break out of that.”

The waiting list for a three-bedroomed council house in Westminster is now eight years and five months, and if families fail to bridge the gap between their housing benefit and rent, they may even be moved out of London.

“We had one family who were moved up to Birmingham,” says Corcoran. “They were well-established in London, and all their support and childcare was down here. They were literally uprooted and moved 120 miles away from their family.”

The housing crisis needs to be tackled urgently, she says. “There’s a massive lack of investment in building social housing. We need to have a proper, well-invested programme of building social, affordable housing year on year.”

While 30 per cent of the centre’s funding comes from Westminster City Council, the remaining £1.5 million has to be raised each year through voluntary sources – a daunting prospect. “Every day is a fundraising day,” says Corcoran.

Many of the charity’s clients are immigrants, who are often trying to clarify their status, she says. “We meet a lot of people who have been here for a long time. Their children are in school, they’re working, and then something happens that makes everyone realise that their status isn’t clear.

“Their son or daughter who was born here might go to college, and they can’t find their papers. If they are over 18, that child, who has been born and bred here, is then at risk of being deported. There are more than 120,000 children in the UK caught in a vacuum, whose status is unclear.

“We help people regularise their status, and we will go to tribunal level to fight their cause. Or we will say, ‘There’s nothing we can do – the best thing you can do is join one of the schemes that will help you go home’. Last year, we had 69 invidivuals whose status was regularised, and they’re now net contributors legally. So it is possible.”

Working at the Cardinal Hume Centre can be tough, says Corcoran. “There are success stories, which is great, and that’s why I enjoy coming to work – we all do. But we hear so many heartbreaking stories as well.

“I worked for an international NGO (non-governmental organisation) before I came here. I’ve travelled in all parts of the world, and I’ve seen poverty of every kind. But I never thought I’d see such utter destitution here, in my own country and in the middle of London, with people who have zero.

“So while we do have successes, we shouldn’t need to have that success in the first place. The situation shouldn’t be demanding that, but it does. So within that we do what we can, with limited resources.

For more information on the Cardinal Hume Centre, visit www.cardinalhumecentre.org.uk 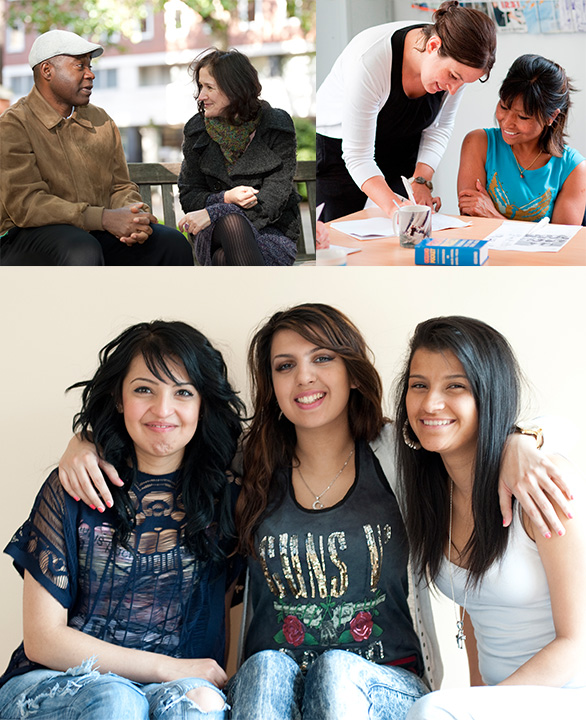