Bake it with flowers

Peggy Porschen’s expertise with cakes is legendary, but she has now combined this skill with her love of all things floral in her latest book.

For the sweet-toothed amongst us, the Peggy Porschen Parlour, a boutique bakery on the corner of Ebury and Elizabeth Streets, has been a source of sugary delight since it opened four years ago.

For Peggy herself, it is the fulfilment of a long-held goal. “I always dreamt of having my own cake shop,” she tells me over a cup of tea and a slice of salted caramel cake – a moist, caramel sponge layered with caramel icing and dark chocolate ganache, and topped with salted caramel cubes.

The parlour is “feminine and pretty,” she says. “People have described it as a ‘slice of cake heaven’, or a ‘pink palace’. It’s tranquil, and you have the lovely smell of cake around you. It’s a relaxed and dreamy atmosphere.”

Peggy, a mother-of-one who runs the business with her husband Bryn Morrow, has just published her latest book. Entitled Cakes In Bloom, it shows the reader how to make beautiful sugarcraft flowers for decorating their cakes. Filled with stunning photography and step-by-step guides, its delectable recipes range from edible spring blossoms to rose and violet cupcakes that look too good to eat – well, almost.

“It’s a book that I’ve been wanting to write for many years,” says Peggy. “Making sugar flowers is one of my passions and strengths when it comes to cake-decorating – they complement a cake so beautifully.

Peggy did a lot of resesarch for the book, especially on the more complicated flowers. “I wanted to take the time to widen my repertoire. While the rose is a flower that we do over and over again, there are other beautiful flowers – such as peonies, dahlias, anemonies and poppies – that I have never really perfected and made in my own way.”

Determined to make the flowers look as authentic as possible, Peggy bought the blooms when they were in season and then dissected and photographed them, including the stamen, buds and individual petals. “The veins, the shape and the edges of the flowers, and the colouration and shading are unique,” she says. “You have to get each petal right so it comes together to look as similar as possible to the real thing.”

An involvement with flowers is something of a family tradition for Peggy, who is originally from Germany. “My mother and grandmother were both florists, and my family has generations of gardeners and florists,” she says. She herself worked part-time as a florist while she was still at school, and has always loved flowers.

The book is suitable for all levels of cake-maker, and aims to make sugarcraft as approachable as possible. Flowers range from a violet, daisy and rose bud, which are simple to create and ideal for beginners, to intricate creations such as a beautiful dahlia.

Peggy’s love of cakes also started at an early age. “You know how in England you have afternoon tea? In Germany we have kaffeeklatsch, which is a word for coffee, cake and a gossip,” she says. “All the women of the family will come together on a Saturday afternoon and have a slice of cake, usually with a dollop of whipped cream on top, and a cup of coffee. It’s a tradition that I grew up with.”

Peggy’s favourite part of birthdays was always the cake, she adds. “My parents always ordered a lovely, simple but pretty birthday cake for me from the local bakery, and that was the highlight of the day. I still remember the smell of the marzipan and butter cream.”

Having decided to forge a career in cake-making, she moved to London in 1998 to study at renowned cookery school Le Cordon Bleu. She then worked as a pastry chef at five-star hotel The Lanesborough, before moving to Rhubarb Food Design.

The catering company made the food for Elton John’s white-tie-and-tiara ball, and Peggy was asked to create a Russian-themed dessert for the party. She duly designed and made 500 edible Fabergé eggs, which were an instant hit with guests.

A few months later, she was asked to create a cake for Stella McCartney’s wedding, and she has since baked cakes for Madonna, Sting and Anthony Hopkins, as well as for Kate Moss’s 2011 wedding to Jamie Hince.

In 2005, she published her first book, Pretty Party Cakes. “A book was always one of my big dreams for the future, but I never thought it would come so early,” she says. “I remember feeling nervous and that I needed to think about this hard if I wanted to bring something new.”

The book was an overnight success, and helped Peggy’s career by defining her as one of a new group of contemporary cake designers.

When she opened her cake shop in 2010, Belgravia was always her preferred location, she says. “I always wanted a place where people could enjoy my cakes on an everyday basis rather than only on special occasions.”

The nature of the other shops on the street was also a factor. “There are so many other like-minded businesses on the street – Jenny Packham, Philip Treacy and so on. It’s a street of boutiques and artisans, not chains. There’s a lovely local vibe, and a lot of families and kids. I felt we fitted in perfectly,” says Peggy.

Six months after opening the shop, she opened the Peggy Porschen Academy on Elizabeth Street, and is now looking to move the baking school into bigger premises in the area. “The space is small, but the demand for classes is big and constantly growing,” she says.

The classes attract a mixture of nationalities. “About 70 per cent of our students come from overseas. The baking trend is getting bigger worldwide and sugarcraft is fairly rare in other countries, so people come to London to learn.”

As for the appeal of baking, Peggy finds it therapeutic.

“I find that when you bake, you take your mind off things, because you have to concentrate and you need to make time for it. You get in the zone, and you tune completely into your mixing bowl.”

What is the best thing about cake? “What’s not to love?” she asks. “It looks beautiful; it tastes delicious. It’s a little piece of luxury that you can treat yourself to – it doesn’t cost you the earth.”

Cakes In Bloom is published by Quadrille and costs £25. 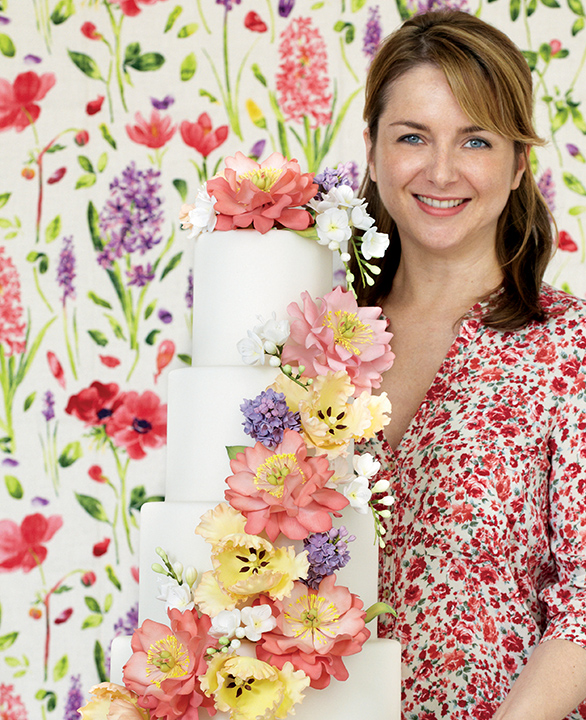