Back to the future

After 19 years, general manager Simon Hirst has returned to five-star hotel One Aldwych. And with ambitious plans for the place, he’s excited to be back in the buzzing Northbank

The Spice Girls’ Viva Forever scored a number one, France beat Brazil to claim the World Cup on their own turf and J.K. Rowling’s second Harry Potter book was released.

The year in question, 1998, also saw the opening of five-star hotel One Aldwych under the guidance of new general manager Simon Hirst.

Fast-forward 19 years and Simon – following six years working in exotic climes from the Seychelles to Singapore – has returned to familiar, fertile ground.

Now part of the One Aldwych board as managing director, Simon says he feels “extremely energised and excited” six weeks into his return.

“When I work for a hotel I get very personally involved in it,” he says in the cosy guests’ only lounge. “Being part of the original opening and launch… I loved Gordon’s vision and concept of an independent stylish hotel that was contemporary and had warm personal service delivery and professional standards.

“When this hotel opened it was remarkably successful and that has continued through using that essential philosophy.”

‘Gordon’ is hotelier Gordon Campbell Gray who founded the hotel as part of a collection which at one time included DUKES in St James’s and Carlisle Bay in Antigua. In 2011 he parted company with One Aldwych and the Grade II-listed Edwardian building is now one of the few independent hotels in London.

A modern, contemporary offering, it’s a hotel which houses an eclectic past. “A lot of people don’t realise that the Aldwych was only finished in 1910,” says Simon. “It isn’t one of the original streets of London and this building was a standard rectangular building when it was owned by the Morning Post newspaper.

“The then London County Council put in this new curved street and called it Aldwych and said that unfortunately they were cutting the cut off the corner of this building.

“That is why this building is actually a triangle. When it was finished and reopened, it was redesigned by an Anglo-French company. I think it looks very Parisian.”

Simon says that when he first joined in the late ‘90s he “didn’t understand” this area of London but soon recognised it as a “buzzy” and “gritty” part of the city.

Since returning to area he has noticedsignificant improvements. “Now it’s becoming more slick and a bit more polished and sophisticated,” he says. “The Strand has improved dramatically. It’s a bit more earthy than Covent Garden which is really looking good. It’s nice for us because we see ourselves as a bit of an individual, indepedent, slightly out-of-the-box hotel.”

The father-of-two began his stellar career with Mandarin Oriental. With his father working for the Hong Kong government, he took a fast-track management course before landing a job with the company that would last three years.

“I discovered that I really enjoyed this business,” he says. “I was OK, but I wasn’t very academic. Although I was quite shy, I enjoyed people’s company and the team spirit. It was a bit lucky really as I found this mixture of the academic, the financial, the practical and the people, suited my personality.”

Before rejoining One Aldwych – and reuniting with 45 members of staff who were still part of the team when he left in 2008 – Simon was running the legendary Raffles hotel in Singapore.

Before he could see the completion of a huge restoration project at the grand dame, he received a call from a director at One Aldwych to inform him there was an opening on the board as MD.

The stars had aligned; Simon and his wife were missing home and general manager Kostas Sfaltos was leaving.

Despite the stroke of luck, Simon is not one to rest on his laurels and is well aware of the need to stay competitive. “More and more is being crammed into this amazing city,” he says. “It’s not just the choice of hotels and restaurants which has increased significantly, but the quality of them.”

With an increasingly experiential generation, does Simon find that makes life easier or tougher when it comes to running a hotel?

“I think it’s tougher, but not in a negative sense,” he says. It makes you sharper. It’s tougher to get sharper, but you get better at what you’re doing.”

“I agree with the basic decision to do something more imaginative, but we just need to work on the message,” he says. The food quality, service and the room is very high quality.”

Simon says that the hotel’s market has shifted since his first spell; now they have more leisure guests and hope to develop further business in Australia and the Middle East.

A soft refurbishment will take place next year and further down the line, there is the small matter of immediate competition with Robert De Niro’s The Wellington Hotel set to become a neighbour.

Simon welcomes the addition to the area and tells me of the starry names who regularly call in at One Aldwych, including several Hollywood actors.

“They like it here because it’s discreet,” he says. 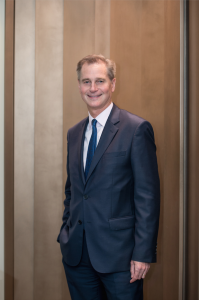