Art in hospital wards can do more than make people smile, it can play an important role in the healing process of patients. Chelsea and Westminster Health Charity has found a way to integrate art into the hospital and raise money for worthy causes, both at home and further afield. Lorna Davies reports

Florence Nightingale observed in 1859 that “variety of form and brilliancy of colour in the objects presented to patients have a powerful effect and are actual means of recovery.” Proof that the importance of the arts in the healing process has long been recognised.

More recently, the lady with the lamp has been proved right after an in-depth scientific research project of eight different clinics and wards in England and Wales found that 80 per cent of patients said art in the ward changed their mood for the better, while 65 per cent said it eased their stress levels. Astonishingly, the research into 700 individuals also found a 2.1 hour decrease in the time it took for women to give birth in rooms with art-designated screens.

Chelsea and Westminster Hospital has played a pioneering role in promoting the importance of the arts in hospitals and has already built up an internationally renowned visual and performing arts programme. The hospital is home to many specially commissioned works, such as Allen Jones’s 60 foot tall indoor sculpture, Acrobat, and Sian Tucker’s mobile Falling Leaves. The hospital also has weekly performances – in wards and public places – of music, dance, theatre, mime, puppetry and storytelling.

Tessa van der Vord has been a fetal medicine midwife at the hospital for more than four years. She says the array of art in the hospital makes it stand out from others. “The hospital and all those who work within it have always provided me with a great sense of companionship, trust and warmth,” she adds.

The art and performances at the hospital are entirely funded by donations from the Chelsea and Westminster Health Charity, which funds projects to enhance the care, comfort and support offered to the 350,000 patients treated at the hospital every year.

“We had two goals: to ensure that over time we honed the collection so that all works were of high quality and suitable for patients, and to bring together the art community in order to raise funds for some of the hospital’s key programmes.”

Susan is also a trustee of MoMA PS1 in New York and is a member of the Metropolitan Museum of Art’s chairman’s council. She’s on the international council at Tate too, so has all the right contacts to reach the crème de la crème of the arts world.

With this in mind, the board embarked on the ‘arts for life’ project last year to raise money for Borne, an initiative to research and treat the devastating effects of premature birth.

Works from acclaimed artists such as Julian Opie, Anthony Gormley, Juergen Teller, Grayson Perry, Banksy and Zaha Hadid were sold at auction in June, raising an amazing £550,000 for the project.

The sale, sponsored by UBS and supported by the Saatchi Gallery, among others, was part of Christie’s post-war and contemporary art week. Pieces by Phyllida Barlow, Ed Burtynsky, Keith Coventry, Tony Cragg, Michael Craig Martin, Dexter Dalwood, Adrian Ghenie, Richard Woods and many more were sold to art lovers and dealers for the charitable cause. An untitled sculpture donated by Anish Kapoor fetched £193,875.

“The art community heard our call for help and responded with unbelievably generous donations of paintings, sculptures and prints,” says Susan. “We curated the sale with some incredibly wonderful and hard-to-find pieces by many leading artists of our time.”
Susan co-hosted the event at the Saatchi Gallery with model Natalia Vodianova.

All the proceeds went to Borne, which is led and developed by professor Mark Johnson, the hospital’s clinical chair of obstetrics. “In obstetrics, perhaps more than any other field of medicine, decisions have to be made in a split-second and acted on immediately to ensure the best outcome for mother and baby,” Mark explains.

Despite caring for a particularly high-risk population of women, Chelsea and Westminster Hospital has the lowest birth mortality rates in England. In the UK, more than one in ten babies are born too soon and worldwide more than 250,000 women die during pregnancy or childbirth every year. Borne’s aim is to improve pregnancy outcomes through education and research.

“The Borne Charity is an amazing way forward to help improve outcomes for babies, and to ultimately provide happiness and health for growing families,” says Tessa.
Borne also aims to transfer the expertise of the midwives and obstetrics experts by sending teams to train doctors, midwives and birth attendants in Ethiopia, South Africa and Uganda. “We anticipate this training will be cascaded down to other teams, improving the care given to many hundreds and thousands of mothers throughout Africa,” Mark adds.

“I am deeply grateful to the arts advisory board and all the artists who have supported Arts for Life. Their hard work and generosity has given Borne the chance to come to life.” 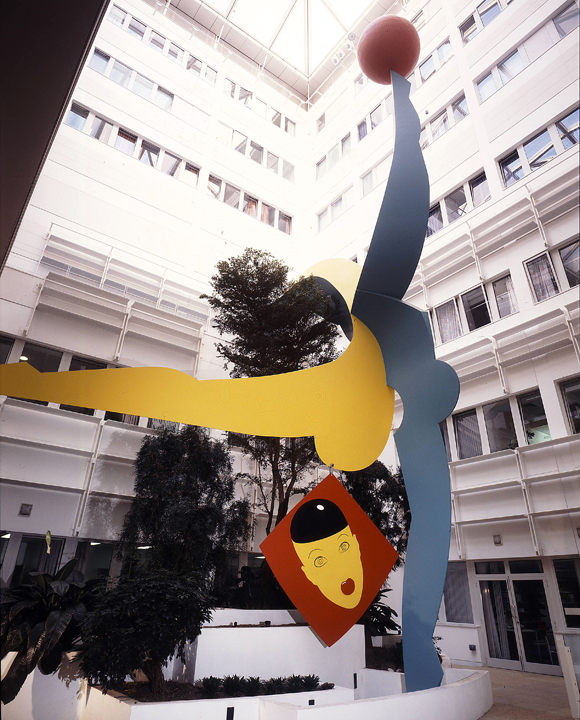