He’s the quintessential Italian chef who has a mischievous glint in his eye, an obsession with mushrooms and a successful chain of restaurants to his name – and he’s had his fair share of highs and lows along the way too. Now, as he approaches his 80th birthday, what’s next for Antonio Carluccio? Jonathan Whiley finds out.

Antonio Carluccio, the godfather of Italian cooking, is telling me about his earliest food memory.

“The tit of my mother!” he says in a throaty accent as rich as aged Parmesan. “I say that and everybody blushes. I had a good memory; it was warm, nice, wet …”

“Antonio!” the PR says, interrupting him. He turns his sun-ripened face and candy-floss mop of white curls towards her. “What?” he says with faux indignity.

Sipping an espresso outside the South Kensington branch of his eponymous chain of Italian restaurants, the 79-year-old is in his element. Spending time in his company is a joy. He’s the outrageous grandad at a dinner party, never happier than when he has an audience in the palm of his hand and a plateful of his beloved mushrooms in front of him.

Although he’s had three failed marriages, Antonio’s love of fungi has endured. It began when he picked truffles as a child in the Italian countryside and has since become a lifelong obsession.

He shows me his walking stick, which bears a rather suggestive porcini – it’s one of 300 sticks he has whittled in his back garden – and even the number plate of his car includes the word ‘cep’.

“If you grow up in the country you really appreciate nature,” he says. “It’s a disaster here in England. People don’t know about mushrooms; it’s a negative culture. People believe the authorities.”

Antonio has written two books on mushrooms and he tells me that after the Second World War, John Ramsbottom, head keeper of botany at the British Museum, published two booklets on the subject, commissioned by the British government.

It seems hard to imagine such a booklet these days. “No, they wouldn’t dare,” he says. “It’s all ‘Fear the toadstool!’ Grrr!”

I suggest that perhaps it’s an extension of our health and safety culture. “Yes,” he says. “But the culture is a very stupid one because you have berries. How many children eat berries and they are poisonous? If you make it sterile, you have to forbid everything. Instead of forbidding things, you have to instruct and educate.”

In the late autumn of his life, Antonio seems as passionate and busy as ever. Soon he’s off to Norway to investigate the mushroom culture in Scandinavia, he has a mushroom-themed children’s book in the pipeline – Signor Porcino and Madame Chanterelle are cast as title characters – and there’s the small matter of promoting his latest culinary tome, Vegetables, which is out now.

As we take our seats inside, discussing which type of mushroom Antonio would be (porcini, just for the record), Antonio says that in Britain we occasionally “crucify” his precious fungi. “Grr!” he growls. “It’s an insult to nature!”

Treating vegetables with more respect is the sentiment behind his 23rd cookbook. “Vegetables in Italy are not a lesser thing,” he says. “They’re equal. I could easily be a vegetarian, but I like the taste of things like grouse.”

There’s a pause as we order. Antonio sighs and then takes the conversation on the first of what will be many tangents.

“I find life funny,” he says, gazing out of the window. “For a certain time it wasn’t very funny because I was suffering from depression. But I’m out of that and it’s just fantastic to discover wonderful things.”

The death of his brother, Enrico, who drowned in a lake aged 13, remains a heartbreaking loss that weighs heavy on Antonio’s mind.

In 2008, with his marriage to third wife Priscilla (sister of designer Sir Terence Conran) on the verge of collapse and following the forced closure of his iconic Neal Street restaurant (the building’s landlord wanted to redevelop the site), Antonio reached breaking point.

Several suicide attempts would follow, including one with a pair of scissors, which at the time was covered up as an accident involving a bread knife.

Medicine and the help of pyschologists, he tells me, proved crucial in his recovery. He checked into the Priory clinic and discovered his appetite for life and sense of humour once more.

“The jokes, for me, they were a placebo,” he says. “They were something to show to people that I was fine.”

I ask him to recall when he was at his happiest in life. “That’s a difficult question,” he says, and there’s a long pause.

“How about now?” the PR suggests.

“Yes,” he says. “Now I’m starting to understand what life is about. It takes a long time. I’ve made so many mistakes and you realise that you can’t rectify them and that you have to make them because that’s life. It’s the result of good and bad and so on.”

Plates of spinach and ricotta ravioli arrive and a bowl of mushroom risotto for the PR. Antonio tastes the latter. “Not bad, but it doesn’t taste very much of mushroom,” he says.

He asks the waitress to bring a bottle of porcini oil and after tasting the ravoli – “they didn’t cook the pasta in enough salted water” – he summons the chef.

They converse in what sounds like cordial Italian for a couple of minutes before he sprinkles a generous amount of seasoning.

“Rule number one with Italian food,” he says, tucking in. “It’s not the look, it’s the taste. It’s the most important thing.”

It seems hard to believe that becoming a chef came relatively late in Antonio’s life. After a brief dalliance with journalism – “the editors would always change what I wrote” – he moved to Vienna to study languages, in part a response to the devastating loss of his younger brother.

It was there that he learned to cook, quickly realising that it could help him woo the ladies. “In Vienna, instead of saying, ‘Come and see my etchings,’ I could say, ‘Come and eat my cannelloni,’” he says with a wicked grin. “Much better.”

He moved to Germany to work as a wine merchant and arrived in Britain in 1975, managing Terence Conran’s Neal Street restaurant in Covent Garden on the Northbank and buying it from him as a brother-in-law in 1989.

At its zenith the restaurant was celebrity catnip – not to mention the training ground for a then unknown Jamie Oliver.

Its popularity was such that when it closed Prince Charles, who once celebrated a birthday with a meal at the restaurant, sent Antonio a personal letter of commiseration.
“There are so many wonderful stories,” he says, recalling the legendary appetite of tenor Pavarotti, following a performance at the Royal Opera House.

“He said, ‘Antonio, I am hungry,’ and I said, ‘Maestro, anything you want,’ and we put prosciutto on the bone on a trolley next to him. I placed somebody there to cut it and he had three portions, but we knew he was still a bit hungry. Then he had tagliolini with truffle – a mountain of it.

“With the exception of the last strand of pasta he said, ‘They were a little bit too heavy, do you have something just with tomato?’ and so he had another three portions.
“Then he had three cutlets, with vegetables, with focaccia, then two puddings. At the end he said, ‘Ahh.’ Antonio bursts into laughter. “It was unbelievable.”

Antonio first began making TV appearances in the early Eighties when celebrity chefs were in short supply. Now the rock-star status that is afforded to the profession is something that baffles him.

“It is silly,” he says. “I was a judge on a young chef competition a long time ago and I asked them what they wanted to do when they were older. They said ‘TV chef’. Everywhere is the same – ‘TV chef, TV chef.’ Try to be a cook first and cook well. It has never gone out of my sight that modesty is the best way forward.”

Now titled ‘brand ambassador’ for the company, he’s no longer involved in the business or day-to-day running of the empire – which includes a restaurant in Garrick Street on the Northbank – that bears his name. He is, however, still a food consultant.

Despite a busy diary he still finds time to cook at home, always using his motto: MofMof – minimum of fuss, maximum of flavour.

Simplicity is celebrated in Antonio’s life. An ideal weekend would involve a trip to the country – to pick mushrooms, naturally – and at home he loves nothing more than nurturing his 15 fruit trees.

He has just completed a TV series in Australia where he spent time with the Aborigines, munching on their famed witchetty grub, which he describes as “creamy”.

Nothing compares to an Icelandic delicacy, though – known as ‘treated shark’ – which Antonio once tasted and vowed never to touch again. “Usually I’m very adventurous, but I tasted it and thought, Nahhh! It was putrified shark.”

He pauses. “In Italy I remember there was a village where the cats were always disappearing because people were eating cats. They were treating them like they would rabbit.”

He retrieves his phone and shows me pictures of a four-month-old white German Shepherd that belongs to his girlfriend, archaeologist Sabine Stevenson.

Vegetables is dedicated to Sabine – “my partner in love” – and certainly their relationship might explain why the twinkle is back in his eye ahead of his 80th birthday.
Does he have any plans to celebrate? “I’ve been invited to friends, obviously,” he says. “There was a time in my depression when I didn’t celebrate birthdays at all. I had about three or four birthdays like that. But now? Yes!”

As we take our leave, several diners seize their chance for photographs, and Antonio holds the door open for three elderly ladies. “Oh,” they say, realising who it is. “Can you recommend the food?” 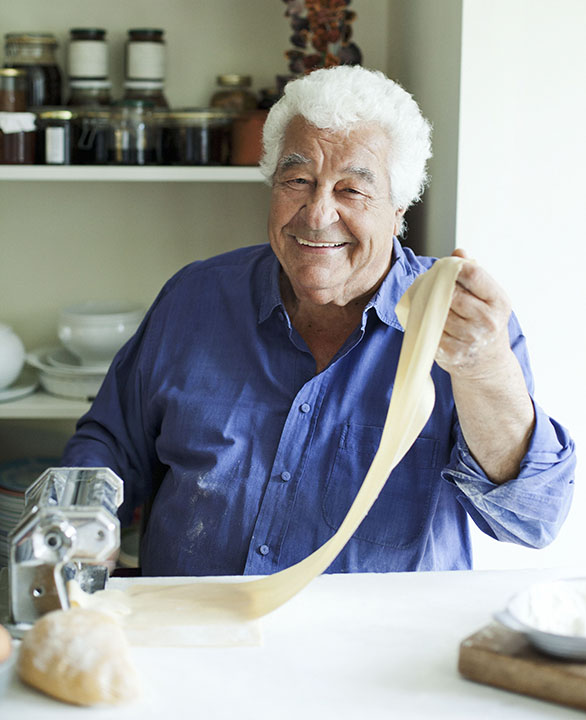