The LAPADA Art & Antiques Fair returns to Berkeley Square this month (September 15-20). We get the low-down on an undiscovered past and new twist on legendary design house Maison Charles.

Antiques dealers are usually associated with just that, antiques. But Peter Woodward, founder of 3details, is both an artist and a dealer.

“It’s funny because I was a painter first, that’s what I went to college for, and I only started dealing to get some money together to go on a painting trip, I used to go down to Italy to paint quite regularly in the 1980s, and I got the bug, as happens if you have a passion for antiques. Since then I have been switching between the two, the painting’s going well, then it’s not and I start dealing things, but I am always on the hunt for things,” he tells me from his studio in the hills near St Tropez.

It’s this creativity that led Peter to his latest venture – a collection of pieces for Maison Charles. Originally producing bronze reproductions in 1908, the Parisian company has become known for its fruit and nature-inspired furniture, in particular, lamp designs such as the pineapple and corn cob, designed in the 1950s by John and Jacques, grandsons of the founder, Ernest Charles. In the 1960s, Jean’s wife Crystiane began creating signature pieces in a fresh new style, as well as the well-known pine cones and pineapples. Still based in Paris, in 2001, Michael Wagner acquired the company.

“I met Michael at the sale of Crystiane Charles’s estate in Paris, where both him and I bought a lot of stuff. I had no idea who he was, I thought he was another dealer. He gave me his card and I didn’t actually look at it until I got back to the hotel because I was exhausted after doing the [Battersea] Decorative [Antiques and Textiles] Fair and then whizzing over to Paris for this sale,” Peter explains.

The sale, at Hotel Drounot, was something of a revelation, with Peter discovering the extent of Crystiane’s talent and input into the company. 50 cases were added at the last minute, not catalogued and with no details of what they held. Peter left Paris with 34 lots, including the un-catalogued mystery boxes, which included plaster maquettes, prototypes, moulds and more.

Michael then saw Peter’s display of these pieces, many of which he had bid against him for, at LAPADA last year. Peter had created metal plinths for the Charles metal leaves, and plaster ones for the plaster pieces.

“I thought he was just being polite, but he was very, very complimentary and asked me to visit. I pass through Paris pretty regularly, so this past year I’ve been there [to Maison Charles] every time and we have got to know each other better and he asked me to design some pieces.”

The result is a collection of beautiful pieces, which Peter will be bringing with him to this year’s fair. The works are made to order, but examples are available, and the collection is set to expand.

“It’s really nice because the workers are incredibly nice people and Michael said to me, ‘treat the place like home, be creative and use my staff to do whatever you want.’ This is just the beginning, he wants me to do a lot of other pieces,” Peter adds.

The project was fuelled by both his creative training, and years of dealing.

“I think it was a combination of my experience with Charles and fine art and sculpture, I studied sculpture at college. Also, I have been at fairs for about 10 years now so you see a lot of presentation of decorative objects and that rubbed off on me a bit.”

Peter will also be bringing some vintage Charles lamps and furniture, as well as a special collection of Marcello Fantoni ceramics.

“It’s very exciting, it’s going to look great all displayed together. The thing that’s really interesting about them [Fantoni ceramics] is that they were purchased directly from his studio through his daughter. They have great provenance and they are studio pieces rather than the mass marketed pieces,” Peter explains.

The LAPADA Art & Antiques Fair returns to Berkeley Square this month for its ninth year. The fair, of which Mayfair Times is a media partner, offers an unmissable

opportunity to source and buy some of the world’s most coveted works of art, antiques, design and decorative arts. Over 100 members of LAPADA, the Association of Art & Antiques Dealers, all experts in their fields, will exhibit an exquisite range of works across an array of disciplines.

Peter says he sometimes plans a year in advance of the fair, holding special pieces back.

“The level of clientele at LAPADA is just fantastic. They are wealthy people who are there because they have an interest in art and antiques and they have the money to make a snap decision, and the taste to choose something beautiful. I have met some incredible people there which I would never have met anywhere else, and they have become repeat clients.”

Peter’s clients have changed over the years, from trade in the 1980s, to a mix of trade decorators and private clients, mainly in America, today. His Cote d’Azur location gives him an edge on other dealers, he says: “there has been a lot of money here for a long time, so it’s a good hunting ground.”

His pieces are sold at both Lorfords in Tetbury and Blanchard Collective in Wiltshire, and in the last five years, online sales have increased dramatically.

“Either sales directly from my website, or websites like 1stdibs.com and decorativecollective.com. I have done a lot over the last year on Instagram. It started when my niece signed me up for it when she was helping me out with one of the shows, it seems to work very well for visually-minded people. I love it. A lot of dealers are afraid of putting their imagery out there, because interior designers can take those images and try and market them as their own, I think that’s what holds a lot of people back. But really the internet is all about sharing information and the more you’re open to that the more possibilities there are for selling.” 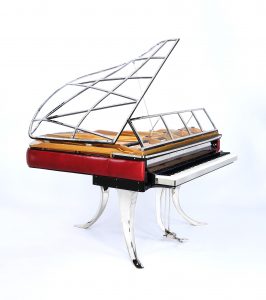